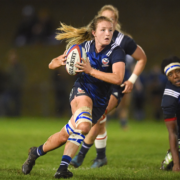 LONDON, ENG. – The USA Women’s Selects (15s) have defeated England Academy 25-24 in a thrilling contest at Newbury RFC in England. Marking the first win for Head Coach Rob Cain and the women’s 15s program this fall, the match featured shining defensive improvements and a relentless fight by each member of the squad.

Set as a developmental match to aid in preparation for the senior Women’s Eagles test with Ireland this Sunday, the Selects side was picked from the pool of athletes for the Eagles’ Autumn Internationals 2018. Overall, the winning performance of the group was an indication of the program’s growth match over match; showing how the chemistry of the athletes and the culture of the collective has charted a positive course.

Adding a special flair to the coverage, Women’s Eagles’ Captain Kate Zackary engaged fans through the game with lively updates that narrated the action from start to finish.

“It’s great to see all the players and work get rewarded with not only a continued improved performance but also a gutsy, physical and determined win against a very talented England A team featuring capped players,” said Head Coach Rob Cain. “The more time we have together, the better we get and it’s great to see the players continue to raise the bar each time we play. Tonight was all about opportunity and I am so pleased that so many players took theirs out there on the pitch.”

England was first to draw blood but USA continued to deliver pressure with a penalty at the breakdown that allowed Megan Foster to go for posts and make it 3-7. The Academy side answered back soon after, taking advantage of a loosely grounded ball that allowed them to run across the tryline, 3-14.

Following a scrum penalty, England was caught offsides allowing USA to kick to touch and take a lineout at the 5-meter line. With good field position, another series of set pieces saw Joyce Taufa break the gain line and set up Evan Hoese for a long run to score the first Selects try. Megan Foster nailed the ensuing conversion and the United States edged the gap 10-14.

A yellow card on England gave the U.S. an advantage on a 5-meter scrum where Katy Augustyn and Sarah Levy both advanced far downfield. Joyce Taufa swooped in shortly after making use of the prime field position to drive in another try and claim the lead at halftime, 15-14.

When play resumed, England’s wing broke free down the sideline only to be stopped by the defensive antics of Jennine Duncan. An intercepted offload by McKenzie Hawkins followed suit but the Selects were called for a knock on and conceded possession back to their opposition.

In a twist of fate, the English were unable to do anything with it themselves, taking the ball into the tryzone two times only to be held up by the United States on both occasions. Awarded a penalty, England’s flyhalf next kicked for points but the attempt was no good, 15-19.

USA responded quickly with Joyce Taufa winning a turnover at the breakdown and Darian Lovelace running down the stretch. Lovelace, unstoppable on her stride, offloaded to Evan Hoese who dotted down easily to give the Selects a 20-19 upperhand.

The U.S. remained patient, continuing to channel their chemistry and cohesion as a group to gain ground.

Then, after an England lineout moved the ball outside, USA’s Kelsi Stockert collected a long kick downfield to keep possession on her side. Jumping in at the breakdown, Courtney Kuehl dominated the ruck and ran halfway down the pitch to dot down, 25-19.

With minutes remaining, a massive tackle by Tiana A’au left England fighting for meters. The USA had a moment of weakness, however, when the Academy side used a series of set-piece plays to advance to the 5-meter line. Though the English scored on the drive, the United States forced the try in the corner, giving their opposition a challenging position to kick the extra points.

With two minutes remaining, the Women’s Selects held onto a brim 1-point lead. Then, in the final seconds, a costly knock on by England marked fulltime, sealing a hard-fought victory for the United States women.

With the win, Head Coach Rob Cain and the touring squad will depart for Dublin and look ahead to one final contest against Ireland this Sunday, Nov. 18 at 8 AM ET. The game will be live streamed on Ireland Rugby’s YouTube Channel. 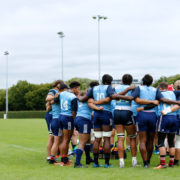 With the opponent announced, the Women’s 15s program has now fully revealed their fall schedule, offering three test match opportunities — along with the developmental game — to give athletes more international playing time.

The game takes place four days after the Women’s Eagles’ senior test match with England (Nov. 9) and less than a week before they take on Ireland (Nov. 18), providing a boost in preparation before the finale of their November Internationals.

General Manager for Women’s High Performance Emilie Bydwell said: “Being able to have England A on our schedule for this November Tour is incredibly important. Our first two tests against New Zealand and England will stress and stretch us immensely.

“Whilst we know this England A game will also be a very high level of competition, it allows us to rotate our squad and make sure that our less experienced players get an opportunity to truly experience a match day and gain valuable international minutes. This game will allow players that may not have logged a high number of minutes in the first two tests to demonstrate their skill sets and character prior to the final test against Ireland.”

The full traveling squad for the Women’s National Team’s November Internationals 2018 was released last week. The Eagles will open in Chicago on Nov. 3 against New Zealand as part of The Rugby Weekend’s triple-header before heading to Europe for the final three games.

Tickets to The Rugby Weekend are available at therugbyweekend.com with the event streamed LIVE on FloRugby. Broadcast information for the remaining three matches will be released in due course.