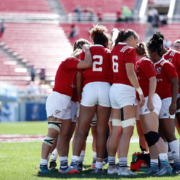 CHULA VISTA, CA. – 12 Women’s Falcons have been selected to participate in the developmental Hokkaido Governor’s Cup tournament taking place in Japan Sept 22-24 (based on Eastern time).

The competition — which includes 12 sevens teams — will allow emerging USA women’s players to gain valuable playing time ahead of selections for the opening round of the HSBC World Rugby Women’s Sevens Series 2019 at the senior level.

Drawn in pool A, the USA will face teams from New Zealand, Diana and the Cook Islands. Australia, rival-Canada, Ireland and Japan will also bring teams to the Hokkaido event, with pool play taking up Day One and knockout rounds beginning on Day Two.

In total, six members of the Falcons’ squad come from the Women’s Sevens residency program with the remaining six having displayed an exemplary performance at the Club 7s National Championships or National Academy Tournaments.

Persinger made her World Series debut in Kitakyushu last season while Foster last helped the Women’s Sevens claim silver at the 2018 Dubai Sevens tournament. Both also have considerable developmental and senior club experience  with Persinger having competed in several Falcons competitions to date and Foster recently winning the Club 7s National Championships with the San Diego Surfers.

USA Rugby General Manager for Women’s High Performance Emilie Bydwell said: “The Governor’s Cup tournament gives us an excellent opportunity to send a talented, young Falcons team to compete prior to the World Series kicking off in October in Denver. The residents in this group are developing well but they need an opportunity to test all they have learned in a World Series environment. The competition will give the other seven players a taste of what the jump to international 7s looks like and show national team staff that they have the attributes to make them competitive in the World Series.”

The Women’s Falcons will kickoff the tournament on Saturday, Sep 22 at 9:22 PM ET against Diana. The Cook Islands will follow next with pool rounds closing out against New Zealand. Through the tournament, fans can stay tuned for updates by following @USARugby on Twitter.