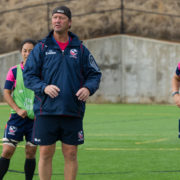 Unfortunately for Ric Suggitt’s team, England’s campaign from Dubai to Amsterdam also resulted in 76 points earned, and the Team GB representative held the tiebreaker with superior margin of points scored throughout the season’s 36 matches.

The fourth automatic qualification spot for the Rio 2016 Olympic Summer Games was up for grabs at Amsterdam Women’s Sevens following Australia, Canada, and New Zealand’s berths earlier in the weekend. England trailed the U.S. by two points in the Series standings going into the final weekend, and the ultimate showdown took place in the Third-Place Match at NRCA Stadium.

As intense as the penultimate match of the season was for all involved in the game, it did not have to come to that for either of the two participants.

“You can rewind the clock and think back to the beginning of the Series,” Suggitt said. “We should’ve done better in Dubai. All we had to do was place one place higher in Dubai and, even if we lose to England, we still would’ve been fourth.

“If you look at every one of those five tournaments going into the last one, we had a chance to do one spot better.”

Neither the Eagles nor England won a Series stop – only Australia (in London) and Canada (in Amsterdam) were able to take a Cup from the reach of New Zealand – leaving points on the table at each event. The U.S. came closest at its home tournament in Atlanta, falling in the Cup Final, while England reached two third-place matches.

The Series is grueling for all teams, no matter the fixture list in a given weekend. The Eagles could argue a rougher schedule was thrown their way with three matches against Australia, five matches against Canada, and a circuit-high seven matches against New Zealand, including five against the Series champion in the first half of the season. England faced the top-three opponents four, five, and four times, respectively.

The Third-Place Match in Amsterdam was just the second meeting of the season between the U.S. and England, despite both reaching the Cup Quarterfinals in each of the six legs. In their first matchup, the Plate Final in São Paulo, England scored two tries with an extra player on the field due to yellow cards.

“It’s not in our control,” Suggitt said of the way the matchups played out over the course of the season. “I don’t fret about playing [England] head to head. It’s an accumulation of teams playing against teams. We had 36 games to have one of those top-four spots and we didn’t do it.

“And we live with it. Time to get to the next part of it.”

The “next part” for the Eagles is Olympic qualification. The 2014-15 Series, as well as the previous season in which the U.S. finished seventh, was set up to give teams chasing their place in Rio de Janeiro an international competition capable of replicating that of the battles to be seen at Deodoro Stadium.

While the most recent season had more at stake as an Olympic-qualifying Series, it could be said the 2013-14 campaign held an even greater importance.

Check USARugby.org Tuesday, June 9, for more on the Women’s Eagles Sevens as they prepare for the 2015 NACRA Sevens Championships.

Catch the Eagles at the 2015 NACRA Sevens Championships at WakeMed Soccer Park in Cary, N.C., June 13-14. Tickets are available from $15 for single-day admittance, with weekend passes and group discounts available. The fixture list for the regional qualification tournament has been released on the NACRA Sevens event page.