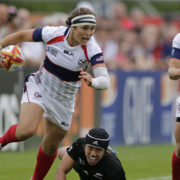 “Having over 200 players in one place was a tremendous selection vehicle,” Steinberg said. “The standard of play was very strong throughout and if we can get more games like that for our players it will help us compete internationally.”

In total, only five players from Women’s Rugby World Cup 2014 have been selected to compete in Calgary from June 25 to July 6.

“We have an experienced core and an exciting new crop of players,” the head coach said. “The new players have very different pathways to being selected, in terms of time played, but we are excited to see what they can do in Canada.”

Core World Cup players sit among the front- and second-row positions only.

Front-row returnees include Katy Augustyn, Sarah Chobot, and All-World Cup selection Hope Rogers. Kimber Rozier brings her experience to lead the back line, while Deven Owsiany slots in as a scrum half.

An additional five selected to the roster have earned caps for the Women’s Eagles. Stacey Bridges, Molly Kinsella, Jennifer Lui, Laura Miller, and Samantha Pankey add experience to the youthful side.

“The Super Series also provides players with an opportunity to lead,” said Steinberg. “With the team changing so much, these games will be a challenge in terms of performance, but they will also challenge the players that want to lead.”

Two full-time Residents at the Olympic Training Center in Chula Vista, Calif., in Jane Paar and Bianca Dalal have also made the cut.

“The skill level in players that are simply playing a lot more is very noticeable, no matter if it’s sevens or 15s,” said Steinberg. “A great example of this is in Jane Paar and Bianca Dala, who both trained out at the OTC.”

The Eagles will open their Super Series account against defending World Cup champion England June 27 at Calgary Rugby Park. The match will kick off the competition with Canada versus New Zealand the second scheduled match.

To round out the competition, Ellerslie Rugby Park will host the Eagles and a familiar opponent in New Zealand Sunday, July 5. The Black Ferns won both matches against Steinberg’s side at the most recent World Cup.

Additional rosters will be announced in the coming weeks for the WCAAs and WJAAs.

In addition to the excitement surrounding player identification, the NASC also initiated a development program for coaches.

“It was a great selection tool for players, but we are very excited about what the coaches were able to take from the competitions,” said Steinberg. “The NASC events will really improve the level of coaching in the country, as well.”

A successful result has already led to the creation of additional opportunities. Further details are expected to emerge in the coming days.