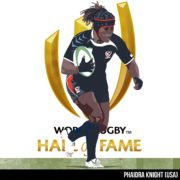 DUBLIN, Ireland – Born on the 4th of July, Phaidra Knight has always been an exceptional American representative as she is inducted into the World Rugby Hall of Fame in 2017. Recognized as one of the best players at two different positions, prop and flanker, Knight has contributed to USA Rugby on and off the pitch since 1999. With 35 total caps, Knight was named USA Rugby Player of the Decade in 2010 by Rugby Magazine.

“Phaidra’s hard work and dedication to the game on the field garnered this well-deserved recognition,” alluded USA Rugby CEO, Dan Payne, “She now continues that effort toward growing the game with her work off the field as well.”

Five legends of the game will be inducted into the World Rugby Hall of Fame in a special ceremony at the hall’s official home in Rugby, England, on Friday, November 10th. A full list of new inductees includes Argentina’s Felipe Contepomi, Al Charron of Canada, Englishman Rob Andrew and Fabien Pelous of France.

“I am incredibly grateful and humbled to be a part of this amazing class inducted into the World Rugby Hall of Fame.” Said Knight, “To be among rugby’s greatest players is something I never imagined as a black girl growing up on a small farm in rural Georgia.”

“I fell in love with this sport 20 years ago and it remains my longest love affair. I hope to give back a fraction of what it has given me.”

Knight will be the second American Woman honored by World Rugby, following Wing, Patty Jervey, who was inducted in 2014.

World Rugby Chairman Bill Beaumont, who will be in attendance at the induction ceremony said, “The World Rugby Hall of Fame recognizes those who have made an indelible mark on our sport through feats on the field of play, displays of great character or through their tireless and inspirational work in driving forward our great game.

“The latest set of inductions includes some real legends, players who have helped to shape the image of rugby and inspire generations of fans. They all have contributed immensely to the enjoyment we have all felt watching top-level rugby over the decades. Each of these five inductees has made a positive impression on the sport, in their own countries and around the world, that will last the test of time.”

Knight was born and raised in the small, rural town of Irwinton, Georgia. It was there she learned the core values of dedication, commitment, hard work, and discipline – qualities that served her well in a highly decorated rugby career that began in 1997 at the end of her first year studying law at the University of Wisconsin. Knight was immediately captivated by the sport when intrigued by the “tackling” atmosphere.

Knight won 35 caps for the United States and appeared at three Women’s Rugby World Cups, in 2002, 2006 and 2010. In the first two tournaments, she was included in the All-World Team twice. Never one to shy away from the physical side of the game, Knight started out as a prop and concluded her playing days at hooker, but most of her 18 years on the field were spent as a tear-away flanker. The University of Wisconsin graduate also played for USA Women’s Sevens, from 2006 to 2009. Knight’s unswerving commitment to rugby continues to this day, as a coach, USA Rugby Board member, TV analyst, and judicial officer.