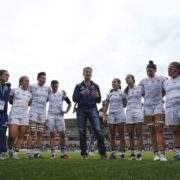 LAFAYETTE, Colo. – After 7 years leading the Women’s Eagles 15s, Pete Steinberg has formally stepped down as Head Coach. Having led the Eagles to the Women’s Rugby World Cup semifinals for the first time in 19 years this past August, Steinberg leaves the Eagles in a good position to compete for the title in 2021.

“It’s tough to encapsulate how appreciative we are to Pete for his dedication with our Women’s program,” noted USA Rugby CEO, Dan Payne, “Completing his time with USA Rugby on a high note in Ireland was great to see, we wish him and his family the very best.”

Steinberg joined USA Rugby in 2011, and looks back on benchmarks during a long tenure.

“When I was asked to continue after the 2014 World Cup we knew it was going to be a short cycle,” said Steinberg. “My goals were to not only build a team that could compete in 2017, but to build a program that should win in 2021.”

Part of that program building was to unify the Women’s National Team pathway, and bring the age grade programs in line with the National team. This approach of “many teams, one program” allowed for an accelerated pathway for young players like Kayla Canett and Tess Feury.

“Tess’s selection was a direct result of the Collegiate All-American team being part of the Women’s Eagles,” continued Steinberg. “She played for the Collegiate All-Americans against the Maple Leafs at the Super Series last year, and played well enough to get pulled up for the Eagles later in the week. That was her first cap and she went on to make the squad for the World Cup.” Many people were involved in the building of the pathway including USA Age Grade coaches and Martha Daines, who was also on the coaching staff in 2015-16, as a critical staff member in player identification and development.

“One of the key differences from 2014 was the integration of the 7s and 15s teams which had benefits for both programs. Hope Rogers, Sara Parsons, Sam Pankey, Jordan Gray and Sylvia Braaten were supported by the 15s to participate at the residency program at the EATC in Chula Vista and went on to play with the 7s team on the circuit. The 7s residents were also part of the summer program for the 15s.”

“Richie Walker’s partnership was critical this year. In 2014, we finished 6th, but all teams finishing above us had access to their 7s players and we did not. Richie’s belief is that rugby players get better by playing and I believe the experience at the World Cup will help the 7s players take a big step forward in the circuit.”

The final part in building for 2021 was coach development through the Elite Coach Development Program. Partnering with former head of Development, Rick Humm, the Eagles leveraged the National All-Star Tournament to provide elite level coaching opportunities and over 50 coaches came through the program. The goal was to create a pathway for coaches to reach the National Team. “In addition to the 2017 World Cup staff, I think the ECDP has identified four or five other coaches that could step up and coach the Eagles.”

Steinberg is quick to credit the staff he worked with throughout his 7 years in charge. “The 2014 staff were wonderful and I am really proud of the work that we did in France,” he noted, “We had great continuity in our High-Performance staff which really showed in 2017 where we were probably the healthiest team in Ireland. We didn’t have an injury that kept a player out until the final game.” The coaching staff had a lot of turnover from 2014 with Peter Baggetta being the only hold over. “Peter was the source of the Eagles approach to play” along with Rich Ashfield, Liz Kirk and Richie Walker formed what Steinberg called “an excellent, cohesive coaching staff.” Steinberg also has high praise for Roshna Wunderlich, the team manager who has been with the program since 2012. “Best manager I have ever seen,” Steinberg said of Wunderlich. “It was especially impressive considering she had her 2-month-old baby with her in Ireland.”

The Eagles have also rebuilt relationships with teams that came before them. The Women’s Eagle’s cap and performance database has been rebuilt and the World Cup team was sent off by the first ever Women’s Eagles from 1987.

“This reconnection with the past was very important to the team’s performance” said Steinberg. “Meeting the pioneers in DC at the congress meeting was a very powerful moment and it was something that we talked about during our time in Ireland. None of this would have been possible without the hard work of Tam Breckenridge.” Steinberg referred to Breckenridge as the “glue” that has held the Eagle program together in the last 3 years in her role as the National Team Pathway Manager.

Finally, Steinberg had strong praise for Chairman Will Chang and CEO Dan Payne. “It was amazing to have Will and Dan in Ireland for such a long time,” he said. “The new leadership of USA Rugby has made a commitment to continue building on the success of 2017 and put a plan in place so the team can be a favorite going into 2021.”

“Peter has made a tremendous contribution to women’s rugby in the United States,” added USA Rugby Chairman, Will Chang, “It was a pleasure to join Peter and our Eagles in Ireland for the Women’s Rugby World Cup. I had the opportunity to witness a spectacular performance from him and our athletes. On behalf of USA Rugby, I want to thank Peter for all he has done to advance the game of rugby in our country.”

Part of the commitment mentioned by Steinberg is the appointment of a new role, General Manager of Women’s Rugby, which is projected start this fall. Once filled, the General Manager will start work on recruiting the next Women’s Eagles Head Coach.