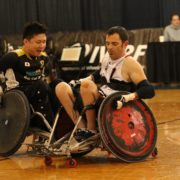 Like many kids, Jason Regier grew up playing sports. Soccer was his favorite. Starting in junior high school, he began playing soccer year-round and ultimately used his commitment and talent to make Oregon State University’s squad. “Sports was really what took me to college,” he says. However, Regier’s life took an unexpected turn when his car went off the road while traveling back to school to finish his senior year in 1996. His car rolled several times, and Regier sustained a severe spinal cord injury.

After undergoing surgeries to repair the damage, Regier found himself in Colorado’s Craig Hospital for rehabilitation. In his last week there, a wheelchair rugby tournament was held as a way to help patients discover adapted sport and give them hope for their recoveries. Regier saw the tournament and decided to go out for rugby the following season.

At first, Regier just wanted to play as a way to stay active, but soon, he realized it was an avenue back into the lifestyle he had enjoyed before his injury. And rugby didn’t just get Regier back into the world of athletics. “For me, rugby early on was my ‘rehabilitation 2.0’ – rehabilitation back to the real world. I was meeting guys who were working, living, playing sports, traveling…they were fully independent even though they had similar injuries to my own,” Regier says. “It was a big motivator to see that other people had overcome what I was going through.” In his second year playing, Regier began traveling and competing at a higher level, at which point he was invited to join the development team, a pathway to the national team. From that moment, he made the Paralympic Games his goal. Determined, Regier started playing internationally in 2005, then worked his way onto the Paralympic squad for the 2008 Games in Beijing and the 2012 Games in London, making Rio his third Paralympics appearance.

Nineteen years after first getting onto the court, Regier is still passionate about the sport he loves and is serving as a veteran leader and captain to his teammates. With many newcomers recently added to the roster, Regier is excited to show the world what the Eagles can do. “We know that we can win it, but we’re not coming in overconfident. Even though we’re ranked #1 in the world, we’re not overlooking anyone. The ranking is nice, but it doesn’t change how we’ll play.”

Certainly, Regier is proud of his team, and he is even more proud of the supportive community of which he is fortunate to be a member. This July, USA Wheelchair Rugby joined the Men’s and Women’s Sevens Olympic teams along with the athletes’ families and supporters for USA Rugby Trust’s Olympic Sendoff. “It was great for us to connect with the rugby family,” says Regier. “Even though our games are different, we have the same hard-hitting mentality and the same great community aspect that surrounds the game. Joining USA Rugby for that event was a really nice homecoming for us.”

You too have the opportunity to join this community. You can support these athletes on their journey to the top of the podium by giving a gift to USA Wheelchair Rugby. “When you watch wheelchair rugby at the Paralympics, you’ll see it’s the hardest-hitting game in the Paralympics. The amount of action and athleticism involved in this game will blow you away,” says Regier.

Team USA takes the court for their first Paralympic match on September 14. Don’t miss this opportunity to join the excitement! Show your pride in Team USA and in the athletes who have dedicated their lives to representing our country. Give your gift today.