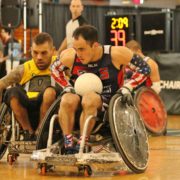 “At a very basic level, wheelchair rugby changes lives,” says Paralympic Games veteran and USA Wheelchair Rugby team captain Chuck Aoki. “Participation in sports is important for anyone, but it’s doubly important for someone with a disability.”

Born with a rare genetic condition that inhibits sensation in his extremities, Aoki grew up playing wheelchair basketball in Minnesota. After seeing the film “Murderball” in high school, he decided to try the intriguing and brutal game spotlighted in the documentary. “I saw these guys running into each other, knocking each other over…it looked awesome,” he recalls. Soon after, he talked his parents into taking him to watch a Minnesota Steelheads practice (formerly called the North Stars). Soon, Aoki realized that this was his calling. He joined the team and played his first two seasons with the North Stars, winning the DII National Championship in 2009.

It didn’t take long for the national team to recognize Aoki’s talent and leadership on the court. Since his international debut at the 2010 IWRF World Wheelchair Rugby Championships in Vancouver, British Columbia, he has been a staple for USA Wheelchair Rugby. Now onto his second Paralympic Games, Aoki is ready to lead his team in Rio. “We’ve had to battle our way through adversity just to make it to the Games,” explains Aoki. Though the team is currently ranked number 1 in the world, they were not given an automatic berth to Rio. An additional challenge, the team has been shaken up in the months leading up to the Games, with some athletes coming onto the squad as recently as this spring. Of the eight teams competing in Rio, the United States was one of the last squads to qualify in Paris in April. The team has pushed through the trials of having a young roster, and Aoki says these challenges have only made them stronger: “We’ve gone through a lot. It has put us in a position to do really well in Rio.”

When asked whether carrying the #1 ranking into Rio has affected the way the team has prepared, Aoki recognized that it does add some pressure to their performance, but ultimately says it doesn’t matter. “No one cares what we’re ranked now,” he explains. “All that matters is how we’re ranked after Rio.” He also notes that the top title has given the team some added motivation, sharing, “The veterans are encouraging the younger players…telling them not to let anybody take what’s ours. We’re accepting it, embracing it, and we’re ready to kick ass.”

For Aoki, however, the Paralympic Games means more than defending their number one title. Rather, this is an opportunity to develop the sport domestically while introducing it to a new crop of athletes. “The growth of USA Wheelchair Rugby impacts the growth of the sport across the board. If we are able to develop as a team now, we will help develop the players who come after us,” Aoki says. He also recognizes the importance of having more sports programs available for athletes of all abilities. “This has changed my life. It’s given me purpose,” he say.s “It can be hard to grow up with a disability. You can feel isolated and alone. Adapted sports has given me a sense of belonging that I wouldn’t have gotten anywhere else.” For this reason, Aoki encourages rugby fans to donate to USA Wheelchair Rugby. “You can really change someone’s life. You will help them become more active and more involved in the community. Any donation you give will be paid back ten times over in ways you won’t even be able to imagine,” Aoki shares.

By giving a gift to support Team USA in Rio today, you can give Paralympians of tomorrow the opportunity to represent their country.

Grow the game for athletes of all abilities. Make your gift to USA Wheelchair Rugby today.