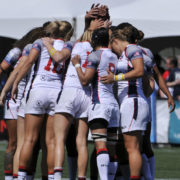 The Eagles defeated Canada for the first time in three meetings this season in the Canada Women’s Sevens Plate Final. The win allowed the Eagles to hold on to fifth place in the Series standings. On 48 points, the U.S. can qualify for the Rio 2016 Olympic Summer Games by finishing fourth or better at the end of the season. Should they finish below fourth, the Eagles will attempt to qualify in Cary, N.C., at the 2015 NACRA Sevens Championships.

Kate Zackary is among the non-traveling reserves for the final two rounds, making room for Olympic experience in the form of bobsledder Emily Azevedo. The UC Davis graduate attended the team’s camps at the Olympic Training Center and earned one of 12 U.S. jerseys.

Azevedo, a U.S. Olympian at the Vancouver 2010 Olympic Winter Games, had been previously training off-site.

“We’ve done this in the last three or four tournaments,” Suggitt said. “We bring in a new player so we don’t leave any stone unturned. We want to see if they can actually work within a team environment, then, when they get out there, they’re productive when they’re on the field.

“Emily has great physical attributes, she’s blazing fast, and very powerful. This will be a great opportunity for her to be judged equally in that environment to make a decision for NACRA Sevens – if we have to go there – and the Pan Am Games.”

In back-to-back weekends, Suggitt said the Eagles must reach a Cup Final in one tournament and a Cup Semifinal in the other to earn an automatic bid to Rio 2016. France, in fourth, gained two more points than the U.S. last round to take Les Blues clear by four points. Just 12 points separate Canada in second and Russia in seventh.

The Eagles have been drawn in Pool C with Australia, China, and Fiji. The U.S. set the record for widest margin of victory on the Series at Emirates Dubai Rugby Sevens with a 61-0 defeat of China. The Eagles have also beaten third-ranked Australia in their last two Series matchups.

“We have a pretty good draw, but there are no easy games,” the head coach said. “Every team’s getting better; every team wants to win.

“There are still six teams battling for three spots. We won’t be counting on anyone else. Our players are all prepared; we’ve looked at the mathematics and different scenarios, and it comes down to us at the end of the day.”