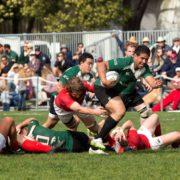 Northern California (NorCal) has a rugby culture steeped in history, and is one of the oldest unions in the United States. Founded in the 1870s, NorCal has always been one of the major hotbeds for rugby in North America, and that hasn’t changed. In 2014, Ben Parker took over the presidency of the Northern California Rugby Union, and since then has continued to look for ways to grow and expand the game within his jurisdiction. His tenure has been defined by a myriad of changes that have been aimed at improving the experience of those involved in the game. He has driven for greater parity, greater coaching, and greater access to the game. All of these goals have culminated into a mix up in conference play, bringing in the world’s best coaches to deliver clinics, and so far they’ve been paying dividends.

When Parker took over the role as President of NorCal, one of the first things he did was look at his calendar. This wasn’t to check the date, or to make a note so he could remember the anniversary of his position, rather it was to work out which month would allow his members the greatest access to elite rugby knowledge.

“We were looking for the best time where we would have access to as many of our members, and October was the best month.” said Parker.

This seemingly innocuous task, has proven to be anything but, as he has been able to bring in Sir Graham Henry, the World Cup winning coach of the All Blacks, and Jason Ryan, head coach to the defending Super Rugby Champions, 8 Canterbury Crusaders.

One of the other major changes that Parker has implemented administratively was to help fund clubs so they could gain access to the equipment needed to improve their play. Parker cited that by having “Capitol Items” at a club’s disposal would help to “Lift the tone and the demeanor.”

Parker’s agenda to improve access to quality rugby is only continued by the 2018 Rugby World Cup Sevens being held in San Francisco. When asked about the impact that this would have on the rugby community around the area Parker responded: “They are recruiting an enormous amount of volunteers (1200)… and we are promoting them (the members of NorCal) to step up and make it happen.”

Getting such a great opportunity to expose so many people to the game doesn’t come around often and Parker, being fully aware of this, already has plans in place to capitalize. His agenda is includes hosting a coaching clinic before the World Cup to introduce local community members to the sport, during the event he hopes to have a booth set up to connect those in attendance with a club near them, and after it he is planning to host a 7s tournament on treasure island. However, in his opinion, talk is cheap and he wants to see results rather than just ideas: “I’ll trade positive chatter for a ticket sale”.

With all of the excitement going on around Northern California, between the coaching clinics and the Rugby World Cup Sevens, you could be forgiven for forgetting that there is still a season to be played. Heading into the 2018 season for NorCal rugby, to the casual observer it may look fairly regular, but to those who have followed the union for an extended period of time, the only recognizable feature will be the names of the clubs.

Due to the elongated nature of the “CAL Cup” competition, Ben Parker thought it best to reshuffle the divisions. “The duration of the season was too long, so we’ve combined the top three teams from NorCal and Southern California.” Cost played its role in the reshuffling of the divisional alignments. “We’re having to plan six months in advance, to try and get 10 games played at a cost-effective rate.”

While the reallocating of teams, and creating hybrid divisions may seem a little foreign, it is nothing new for NorCal, as the women’s side of the game has been operating to a similar structure for a proffered amount of time. The results have been a success for Parker and the players within his Union. Division I is solely represented by Life West women’s who are the defending national champions. They face off against Division II opponents who, include last year’s national runner’s up, San Francisco Golden Gate. The Sacramento Amazons are also included in the second division for women’s and they have been a feature at several of the finals over the previous years. When asked about the recent success of the NorCal women’s clubs in national play Parker responded in jest: “It feels like we have a standing reservation for the Women’s Division II spot” But in earnest he had nothing but praise for the women: “They play in a very competitive league, and their success is a great reflection of the hard work that the women have done.”

The season kicks off in early January, and if last year’s results, and the effort put into the preseason this year are any indicators, it should be another vintage year for the NorCal rugby Union.