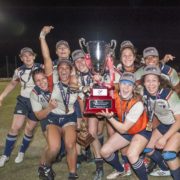 After winning the first two Women’s Premier League (WPL) titles in 2009 and 2010, New York spent the following four seasons in the fifth-place bracket, slipping a place each year. In 2014, New York was winless and finished eighth overall. But even then, the pieces were in place to rebuild, and rather than drop a division or disappear entirely – both of which have happened to former WPL teams – New York spent the next three years regaining its former status as champion.

Five years after its last WPL title, New York was back in the championship bracket. In 2015 the team finished fourth, and after an undefeated regular season in 2016, New York finished third. During both post-seasons, the Blue Conference’s Glendale beat New York, but those defeats provided valuable lessons.

“It was a new experience for most of our players last year. Glendale had a lot of players who had been there and done it. That experience showed, and the occasion got to us,” New York coach James English reflected on the 2016 tournament. “Winning is a skill in itself and it takes experience to learn how to win, especially in that environment. We ended chasing the game last year, a situation we hadn’t been in all season, and Glendale did a really good job of closing the contest out.”

Some of that knowledge was lost in player turnover this season. Compare the 2016 and 2017 championship rosters, and only five players returned to the starting XV: Eagle captain Tiffany Faaee, Alycia Washington, Cynthia Wright, Shelby Lin and Emily Magee. Factor in the reserves and there is certainly more experience, and then of course there’s veteran Rebecca Brafman, who has now played on all four of New York’s national championship teams (including the 2016 DI title).

But more importantly, the right culture was in place, and that set up the younger and newer players to succeed during New York’s 8-0 regular season. English was effusive in his gratitude to captains Faaee and Lin.

“They did as much work off the field as on the field to bring the group together,” the coach praised. “It was a ‘club’ effort, not just the 1-23 you saw on the field. We fielded a DI team for the first this year which helped drive competition for places and really made it difficult when it came to selection. Having strength and depth in practice and on game day was a real asset throughout the year.”

The test, of course, awaited in the playoffs, which began with a semifinal against then-reigning champion San Diego. During the middle part of the game, New York went from leading 26-5 to trailing 32-26.

“We try to put our focus on the processes involved in winning – an emphasis on what we are trying to do and why,” English explained. “We had two nail-biting games, first San Diego and then Glendale. Instead of panicking when we are down, we were able to be patient, trust the process, pull together in the right direction, and produce the kind of rugby we want to be known for. A lot of credit has to go to the players.”

New York backed itself with two late tries to win 38-32, setting up a championship match against Glendale, which had defeated Beantown 32-0 in the semifinals. That rally spirit was needed once again, as Glendale led New York 19-5 early in the second half.

“We weren’t panicking. The message was to be patient,” English recalled the halftime conversation. “Glendale did a great job starving us of possession and slowing down the breakdown. Halftime gave us an opportunity to reinforce some of our principles, especially in attack, and make some slight adjustments.”

New York played with confidence, especially with ball in hand. The 25-and-under group performed impressively given the stakes, with players like Tahlia Brody, Jennifer Salomon, Kristen Siano and championship MVP Gio Cruz, among others, upping their games.

“I hate to single out performances when it was a real squad effort. However, Gio was a well deserved championship MVP,” English commended. “She really epitomized a lot of what we are about. She is young, fearless and full of energy. She plays on the edge. Her natural timing and ability at the breakdown paired with her athleticism as a ballcarrier was a lethal combination. I’m excited to see how she continues to develop.”

New York chipped away at the deficit and took a 27-19 lead late in the game.

“When you are playing at that level, the momentum will always swing back and forth. Glendale are always so well organized and play a great deal of territory,” English noted. “We knew if we were patient we could manufacture chances. And when we created opportunities, we had to take them. We showed we could be clinical in our execution under pressure.”

Glendale, too, knew how to exert pressure and drew a yellow card on New York’s tryline. A dive-over try and quick dropkick conversion followed, and the Merlins were within one point of New York, 27-26. There was time for one more passage of play.

“When I started as head coach two years ago, we had a really clear vision of how we wanted to play the game,” English reviewed the build. “I think giving the players opportunity to try new things and make mistakes during the season, led to two confident, fast-paced and highly skilled performances when it mattered. The players seemed to connect with our playing philosophy and have a great time doing it. I was blessed with a group who were open minded, creative and fearless even on the biggest stage most had played on.”