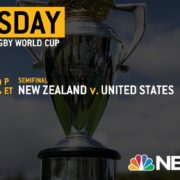 LAFAYETTE, CO – In light of the United States Women’s National Team reaching the Women’s Rugby World Cup semifinals for the first time in nearly 20 years, NBC Sports has shuffled its programming to bring the match to the U.S. LIVE Tuesday, Aug. 22 at noon ET. American sports fans now have the distinct opportunity to view the match on cable television when the Eagles take on the New Zealand Black Ferns for a spot in the World Cup Finals.

USA Rugby CEO Dan Payne recognizes the remarkable occasion, “NBC is a partner in growing rugby that every fan in America should be thankful for having. I know I speak on behalf of all American rugby fans when I thank NBC for making such a strong statement in support of our game, and moving this match to a window where it can be seen live,” said Payne.

NBC Sports has long supported rugby in the United States, offering an extensive platform for new fans to discover the sport, including coverage of Rugby Sevens during the 2016 Olympic Games . On September 16, fans also have the opportunity to catch Premiership Rugby on NBC Sports with the American Series, when the Newcastle Falcons square off against Saracens at Talen Energy Stadium in Philadelphia. With the support of such quality coverage, rugby has an exceptional opportunity to grow within the U.S.

“Now it’s up to us as a community to rally friends, neighbors and fans alike to take advantage of this exclusive broadcast and support our Women’s National Team on Tuesday,” continued Payne. “Let us not forget to thank the women competing in Ireland and representing us so proudly. Thanks to their efforts, along with the coaching staff, fans and of course, NBC Sports, we’re fortunate to share this incredible moment together.”

After collecting a crucial bonus-point in today’s loss to the England Red Roses, the Eagles edged out Northern rivals Canada, and tournament hosts Ireland for the 4th Semifinal spot in the Women’s Rugby World Cup. The decisive match against New Zealand kicks off Tuesday, Aug. 22 at 12 p.m. ET on NBC Sports.