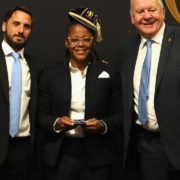 At the 2018 National Development Summit (NDS), USA Rugby will honor its latest World Rugby Hall of Fame inductee, Phaidra Knight. Knight was inducted into the Hall of Fame in October, and will be honored by USA Rugby CEO, Dan Payne, at the banquet dinner on Saturday night.

Knight, who grew up in rural Georgia and began her playing career with the University of Wisconsin, displayed her trademark modesty when asked about playing such a large role at this year’s NDS: “I am simply one of many attending who love our sport and desire nothing less than creating the most useful resources possible to aid in the success of all who engage.”

During her career, she has worn many hats, and now that her days as a player have ended, she continues her commitment to the game through coaching, providing analysis on broadcasts, and even serving as a board member for USA Rugby. With this much experience in nearly every area of the sport, she will be a great addition to the summit and will be able to provide a well of knowledge to those in attendance.

Knight, will be speaking at the dinner about the places she’s seen rugby go since she first got involved in the sport and to where she believes it will go from here. When asked about the importance of NDS to helping grow the game within the country, Knight noted: “The NDS is a very important event to USA Rugby, as it offers and opportunity for the dissemination of rugby relevant information…It’s also a great forum for rugby minds to network, a critical component to building the business of rugby.”

Knight was capped 35 times for the Women’s Eagles, beginning her career in the front row but eventually making the transition to the back row. Phaidra appeared in 3 World Cups for the Eagles represented in the 2002, 2006, and 2010 editions. On top of her impressive feats in the 15s game she also accumulated an impressive four-year career (2006-2009) in the 7s circuit.

Registration is still available for the National Development Summit, for every registration between the 18th-25th of December, a Rookie Rugby Ball will be donated to youth organizations in the US.