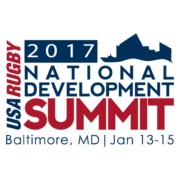 All three were members of the Team USA squad that placed 5th in the 2016 Summer’s Olympics – rugby’s return to the games after a 92-year hiatus.

The 2017 NDS also brings back the popular “HP Friday” sessions that were introduced at last year’s event. Walker, who was appointed head coach of the Women’s Eagles Sevens in March of last year, will participate in sessions offered on January 13. HP Friday sessions highlight coaching, tactical, and technical information from the highest levels of rugby in America.

Kelter recently earned her first cap with the Women’s Eagles XV during a 36-10 loss to France in Paris on Tuesday. The final match of the November Tour is scheduled for Friday, Nov. 25, at 3 p.m. ET. The match will be broadcast on The Rugby Channel to subscribers.

Kenny Forehand, USA Rugby’s Director of Training and Education, is enthusiastic about having not only Walker, but Carlyle and Kelter as well involved in this year’s Summit, saying: “It’s fantastic to have our Women’s Sevens team involved in the NDS and working with our community to help grow the game.”

The final agenda for the 2017 National Development Summit will be announced in the coming weeks.

For more information on the agenda and to learn more about the speakers, or to find out more information about attending, exhibiting, or sponsoring the 2017 National Development Summit, go to rugbysummit.com.