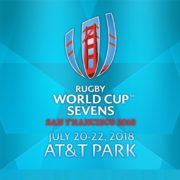 SAN FRANCISCO – In another boost for fans planning to follow or attend Rugby World Cup Sevens 2018, AEG has been named official licensee of merchandise for the tournament, which will be held at San Francisco’s AT&T Park from 20-22 July next year.

With tickets already selling fast for what will be the first time Rugby World Cup Sevens has ever been held in the USA, the plan to expand the RWC Sevens brand to an international audience takes its next step with the appointment of experienced partner AEG. In supporting dozens of the world’s most popular sports franchises, leagues and special events with retail, e-commerce, warehousing, buying and selling, and product development experience, AEG Merchandise has built recognition in the eyes of spectators, fans and governing bodies around the globe.

Tournament Director Philippe Bourdarias said: “This is another important step forward for a tournament that is really capturing the imagination of sports fans in the USA and around the world. The fact that more than 40,000 tickets were snapped up in the first week of sales shows how popular it’s going to be and it’s great that fans, whether in the stadium or not, will be able to access official tournament merchandise through this partnership with AEG.”

USA Rugby CEO Dan Payne said: “AEG’s expertise in selling and marketing sports products is unparalleled and the experience and awareness it will bring to our great game and this magnificent event in the Bay Area will help to make Rugby World Cup Sevens 2018 an unforgettable event.

“The logo, featuring the unmistakable and iconic Golden Gate Bridge, will be worn proudly by Americans and visitors alike on new, unique and high-quality apparel provided by AEG.”

Through this deal, AEG has the exclusive worldwide licence to use the name, logo, insignia, trademarks, and any service marks for RWC Sevens 2018. An online store will be open from 1 September this year with products to be sold in both pop-up and established retail locations before the end of 2017. AEG will create and market a range of tournament-branded clothing and other products, including personalised merchandise.

Vice-President of Merchandise for AEG Sean Ryan said: “We are thrilled to provide comprehensive merchandise services for Rugby World Cup Sevens 2018. From the design, development and sales of a complete line of event-driven merchandise, AEG Merchandise has the experience and support to provide fans with a wide-ranging array of uniquely designed items guaranteed to be treasured reminders of an incredible tournament.”

Details regarding official Rugby World Cup Sevens 2018 merchandise will be made available in due course at rwcsevens.com.