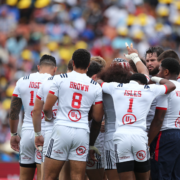 CHULA VISTA, CA. – USA Rugby has released the names of 24 athletes who will train full-time at the U.S. Olympic Training Site in Chula Vista, CA as part of the senior Men’s Eagles Sevens Residency and junior Men’s Sevens Academy programs. The Academy program features three of the 24 total athletes who have yet to make their national team debut and are still part of a collegiate or club program.

All athletes part of the Men’s Sevens Residency or Academy Program are available for selection for the HSBC World Rugby Sevens Series, upcoming PanAm Games 2019 and developmental Falcons tours through the season. Players in both programs will train in a full-time environment led by Head Coach Mike Friday and fellow Men’s Sevens staff.

High performance (HP) camps take place within the structure of the residency program and serve as intensive weeks of training where non-resident athletes are also invited. In these camps, players are tested and evaluated for selection to an upcoming competition and/or to join the Residency or Academy programs.

“In striving to continually evolve, we’ve added some fresh blood to the squad which has provided that energy every environment needs to be successful,” said Head Coach Mike Friday. “We are slowly building depth to this program year over year; and while we are still focused on today, we will continue to plan for life after 2020 to maintain the continuity in the program and crack the American Sporting landscape. It is a balancing act but one we are working hard to achieve.”

All athletes in the Men’s Sevens Residency and Academy Programs come from D1A Rugby or domestic club programs across the United States.

As part of the program’s commitment to further invest in American talent, Development Manager Stephenson will cast a comprehensive net in a new “Eagles Nest” initiative. The initiative itself will see two Men’s Sevens representatives continue to be present at each U.S. tournament while others periodically engage in talent identification of American athletes playing globally. The approach aims to leave no stone unturned in the lead-up to a heavily competitive Olympic Games Tokyo 2020.

“We must continue to explore all avenues in our talent identification and development process,” said Stephenson. “From our competitive domestic playing pool, talent transfer initiatives and non-domestic qualified American players, we are looking to ensure that our next generation of Eagles will continue to hold up the exemplary standards of our Men’s and Women’s National Team programs.”

The Men’s Eagles Sevens will next compete in the fourth round of the HSBC World Rugby Sevens Series at HSBC Sydney Sevens Feb 2-3. Currently tied for No. 1 in the World after claiming three consecutive silver medals, the USA will need to continue their stride in order to conclude the season in the Top 4 and qualify for the Olympics. Sydney Sevens may be streamed LIVE on watch.espnplus.com.

Following Sydney, the United States will take a few weeks rest before traveling to their home stop in Las Vegas Mar 1-3. The Men’s Sevens won their home stop for the first time in history just last year. Tickets for HSBC USA Sevens in Las Vegas are available here or at usasevens.com.