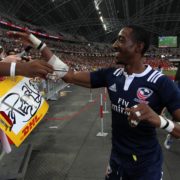 DUBLIN, Ireland – World Rugby has revealed the shortlists for the Men’s and Women’s Sevens Players of the Year 2017 awards in association with HSBC, which will be presented at the World Rugby Awards at the Salle des Etoiles in Monte Carlo on November 26, 2017.

Included among them is Perry Baker of the United States, who with 133 tries scored is currently 2nd all time in American history.

“A well-deserved nomination for Perry.” congratulated Dan Payne, USA Rugby CEO, “It’s been an incredible year to follow his game, we’re very much looking forward to the awards ceremony next month.”

The oldest of the nominees at 31, Baker enjoyed a season to remember in 2016-17, topping the charts for tries and points scored with 57 and 285 respectively. The USA Eagles flyer has electric pace and can make something out of nothing, but has now developed the all-round game to go with his natural speed. If awarded, Baker will become the first Male or Female American to be honored as World Rugby Sevens Player of the Year.

Baker was quick to recognize the nomination as a team achievement, “I was nominated with the support of the other 6 guys on the field and coaches as well.” noted Baker, “Without them I wouldn’t have this opportunity, we work for each other out there.”

Looking back on his pathway to the Men’s National Sevens team, Baker wanted to thank his supporters in Brian Richardson with Daytona Beach Rugby and notably Men’s Sevens head coach Mike Friday for their belief in his ability, “You can believe in yourself all day, but I wouldn’t be here without these guys believing in me and giving me the opportunity to play. I’m very humbled.”

“These exceptional sevens athletes have been at the heart of the success story, inspiring a new generation of fans and players with their skill and athleticism. All are superb ambassadors for our sport and will play a huge part in the sevens success story for many seasons to come.”

For more information on the World Rugby Awards, visit www.worldrugby.org/awards