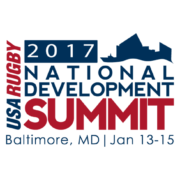 Friday headlines the initial release of speakers at the event, which includes a variety of both past and new presenters to the NDS. Friday most recently coached the Team USA Men’s Sevens team in rugby’s return to the 2016 Rio Olympics. He once again will lead the USA Rugby Men’s Sevens squad on another promising HSBC World Rugby Sevens Series tour beginning Dec. 2 in Dubai.

Joining Friday, are a host of initial speakers sure to appeal to every facet of the rugby world. New speakers include: KJ Feury of Morris Rugby, Robert Taylor, Founder and Owner of SMARTER Team Training and Bryan Miller, an Associate Strength and Conditioning Coach at the United States Naval Academy. Taylor and Miller will bring to the table a new area of expertise at the NDS covering strength and conditioning as a preventative function to concussions and other sports injuries.

“We’re putting together a fantastic group of speakers which reflect feedback we received from the community,” said USA Rugby Director of Training and Education Kenny Forehand. “We’re focusing the 2017 NDS on our community and looking towards the future of rugby in the U.S. over the coming years.”

For more information on the agenda and first release of speakers, or to find out more information about attending, exhibiting, or sponsoring the 2017 National Development Summit, go to rugbysummit.com.