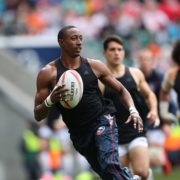 MONTE CARLO, MONACO – In the short history World Rugby has honored Sevens rugby players with a yearly award, no United States Man or Woman has won Sevens Player of the Year. On Sunday, that statistic changed as USA Rugby speedster, Perry Baker, won the 2017 Men’s recognition during the gala in South France.

“First of all, it was an honor to even be mentioned with those other guys out there,” said Baker after his win, “being Sevens player of the year was never a dream of mine, but this just shows the hard work paid off.”

The oldest of the nominees at 31, Perry Baker enjoyed a season to remember in 2016-17, topping the charts for tries and points scored on the HSBC World Rugby Sevens Series with 57 and 285 respectively. The USA Eagles flyer has electric pace and can make something out of nothing, but has now developed the all-round game to go with his natural speed.

Baker’s Head Coach, Mike Friday, took to Twitter to congratulate him, “Congratulations [Perry], absolutely well deserved, we’re all proud of what you are achieving.“

Since 2004, World Rugby has recognized the top player in Sevens rugby, this being the first time an American has won the award. While Perry himself accepted the honor, he was quick to attribute his success to his players and teammates, “I want to thank my teammates for making this possible for me … it means a lot, to take this back home and share this with those guys, my parents and friends … they supported me day in and day out.”

Celebrations however will be brief, as Baker prepares for the beginning of the 2017-18 HSBC Sevens World Series, this Friday December 1 in Dubai. The Men’s Sevens look to improve upon a 5th place finish and where Baker’s speed will play a major role.