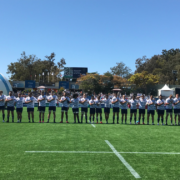 MONTEVIDEO, URU. – A valiant effort by the Men’s Selects came up short in Match Two of the Americas Pacific Challenge 2018, where the USA fell to Uruguay XV 33-18.

The Uruguayan side outmaneuvered the USA Selects by applying pressure in the right areas to sneak across the line for 15 unanswered match-winning points. Through the game, the Selects showed strong periods of tenacity that — when combined with  precise execution — resulted in two bursting tries of their own.

Ultimately, the match was conceded as a result of a few mishandled balls and crucial moments which called for defensive coverage.

“Proud of the fight we brought today in playing against Uruguay’s full World Cup squad,” said Head Coach Scott Lawrence. “We learned a few things about some potential senior Eagles here today. We didn’t get the result but we got better and that’s what we’ll do again.”

The Selects and Uruguay XV opened battle with each team only making it once within scoring distance in the first 30-minutes. The USA had an early opportunity with Vili Toluta’u roughly 10-meters from the zone but a penalty stopped the play in its tracks.

Back and forth penalties had given both teams a 6-3 result by the 20-minute mark, before Uruguay’s Sanguinetti drew a yellow card for an illegal tackle on Psalm Wooching.

Despite playing a man down, the Uruguayans almost dotted down minutes later with a quick ball from a scrum that was passed meter by meter until Arata Perrone landed in the tryzone. The referee was unconvinced, however, noting a forward pass on the offload that prevented the score from being awarded.

It didn’t take long for Uruguay XV to redeem their mishandled ball. After drawing a penalty, the Selects’ opponent brought masterful pressure to a forward moving scrum, allowing scrumhalf Santiago Arata to rapidly pull the ball and reach over for the dot down with very little time for USA to cover defensively.

With momentum, Uruguay went back at it again with a deep run that saw the Selects scrambling for gap coverage. Uruguay’s De Leon then made a high kick to his teammate Favaro for a well-timed catch and run to increase the lead, 15-6.

By this point, halftime was looming and the USA knew they needed to answer before the match slipped away. In came Ryan Matyas.

A huge tackle by Captain Conor Kearns won possession for the U.S. with Hanco Germishuys gaining ground and Deveraux Ferris spotting a penalty to get Matyas the ball. With a perfect dummy, Matyas broke through defenders to outrun Uruguay for a massive score, 15-11.

When the second-half began, following a penalty kick by Uruguay’s Favaro Garcia, speed and decisive execution at the breakdown allowed the USA to get back on board. With no hesitation on the tackle, the Selects made three precise offloads until the ball landed with Dylan Audsley who danced past three defenders to dot down and tie it up, 18-18.

Another damaging penalty allowed Uruguay to reclaim the lead with a kick through the uprights, as both teams fought vigorously to shift momentum in their favor for the remainder of the game.

Strong runs by JP Eloff and Ryan Matyas were stopped on penalties which halted the USA from moving forward. Then, under pressure with the clock dwindling down, Conor Kearns missed a drop kick, giving Uruguay the edge to dominate the rest of the match.

With eight minutes to go and back and USA in another unfavorable scrum position, the Uruguayans mirrored their first try pushing forward until scrumhalf Arata Perrone dashed through the middle near the posts.

The U.S. side continued to fight through a 10-point deficit with six minutes remaining, while the Uruguayans viciously powered through defensive openings to breakaway with a try on the final whistle, 33-18.

In the end it was a tough defeat for the Men’s Selects who currently sit in fifth-place in the overall tournament standings. Having fallen to a 39-30 loss to Tonga A in their first match, the U.S. side needed today’s win in order to contend for a better finish in the tournament.

The selects will face fourth-place Argentina XV (2pts) on Sunday, Oct. 14 at 12:30 PM ET to close out the Americas Pacific Challenge 2018. The match will be broadcast LIVE on FloRugby.