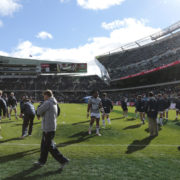 BOULDER, Colo. – USA Men’s Eagles Head Coach Mike Tolkin has selected a 50-man Rugby World Cup training squad ahead of a busy summer of rugby in the United States prior to the team’s jaunt to England.

The list of players – including Men’s Eagles Sevens Residents Danny Barrett, Andrew Durutalo, Folau Niua, Zach Test, and Brett Thompson – is comprised of 28 domestic-based players and 20 professionals in competition abroad. Todd Clever and Thompson began the competitive season with NTT Shining Arcs in Japan and Edinburgh Rugby in Scotland, respectively, before returning home to train in the U.S.

Inaki Basauri of Tarbes and Louis Mulholland at University of Bath are the only two players who have not been in some sort of Eagles or USA Rugby Selects assembly in the past year-and-a-half. The young, England-based scrum half has risen through the Eagles pathway with the Boys High School All-Americans and most recently with the AIG Men’s Junior All-Americans in the World Rugby U20 Trophy Qualifier series with Canada in March, while Basauri joined an assembly in Republic of Georgia in the fall of 2013.

“In the last World Cup cycle, we didn’t have nearly the same level of depth as we do this go-round,” Tolkin said. “It gives you a little bit of relief to think that, if someone were to go down or wasn’t playing well, there are some quality choices that you can make experience-wise.”

The Eagles will assemble in Santa Clara July 11 ahead of the first two rounds of the World Rugby Pacific Nations Cup at Avaya Stadium in San Jose and Bonney Field in Sacramento. The squad for the U.S.’s third year in the competition, which will run through to the Finals day in Burnaby, Canada, August 3, will be announced June 22.

“It’s always beneficial to have guys play in the best possible games at the end of the season,” Tolkin said. “The more we can get those guys playing high-level games closer to when we next meet is always a good thing.”

The U.S. will get an early look at World Cup pool mates Japan and Samoa during the Pacific Nations Cup, which will also consist of a match against Tonga and a final match dependent on tournament seeding. The Eagles will rest between the final match day and their next assembly date of August 15, when the squad will prepare for domestic matches against Harlequins and Australia in Philadelphia and Chicago, respectively.