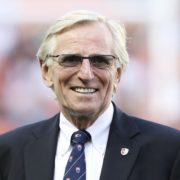 LAFAYETTE, Colo. – The USA Rugby family lost a celebrated member of its history last week when founding partner, Peter Baigent, passed away at the age of 71. Baigent was one of the original members to establish USA Rugby as the national governing body in 1975.

“We’re sad to hear of Peter’s passing, but also incredibly appreciative for his service to American rugby.” Said USA Rugby CEO, Dan Payne, “The game simply wouldn’t be what it is today without his passion and dedication.”

Notably recognized as an administrator with Stony Brook University, Peter was born in Newcastle, England and played with Loughborough University before moving to the US in 1972. While studying at Syracuse University in upstate New York, Peter would co-found the college club representing the Eastern Rugby Union. In 1975, a time when rugby experienced a resurgence in the United States, Peter and representatives from the Midwest, West, and Pacific Coast unions gathered in Chicago to form the American Rugby Football Union, later becoming USA Rugby.

Most notably, Baigent loved to play. Well into his 60’s in fact, as you could still find him on the pitch in 2010.

An obituary for Peter can be seen here, where mention of a memorial is in planning for a later date.