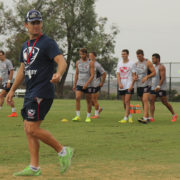 “It was a productive first National Team Recruitment Camp,” Magleby said. “A handful of athletes who were not previously on the radar stood out, and there were a bunch who, given the right environment, could impact this Olympic cycle in a positive way with their athleticism. There were also some younger athletes who probably will be able to affect the 2020 cycle.”

The women’s portion of the Camp was rescheduled due to low registration numbers, but the high performance team will ensure the next Camp draws some of the top non-rugby-playing male and female athletes.

“The National Team Recruitment Camp afforded the opportunity for many to get a look with the national and academy coaches who may not have had that chance in the past,” Magleby said. “We look forward to hosting more, learning from this first ‘beta’ Camp, and providing more opportunities like this for men and women athletes in the future.”

Ryan Gallop of NAKOA Fitness and Physical Therapy, former Eagle Matt Hawkins, Paul Holmes of Tiger Rugby, and Chris Tombs of Serevi Rugby were also on hand in Chula Vista to assist with the Camp. With the next step for several of the athletes with Olympic aspirations likely meaning a place with a USA Rugby National Development Academy, Holmes and Tombs were able to scout for their own purposes while simultaneously noting the pros and cons of an open-tryout-type camp.

“We did speak afterwards in the sense of what we can do to enhance it next time,” Brown said. “Obviously this is just the start and also finding our feet on how to do things and how we can maximize resources and personnel.”

Though the Camp was held at the Olympic Training Center with mainly sevens-specific staff, Tolkin’s presence brought a 15s flavor to the day. Many of the athletes attending Camp took time away from the beginning of their spring 15s seasons to give the Eagles’ head coach something to think about in a Rugby World Cup year.

“I thought there was a good amount that legitimately could’ve put their hand up [for selection],” he said. “I think seeing a guy in action is a lot more valuable for me personally. The sevens dynamic works a little differently; you can get that athlete in, you can fast-track them a little easier. Watching a 15s player in-game brings more value.

“At the same time, this is a starting process. This is a first step.”

Some of the athletes had a rugby-playing background, while others had previously played sports like basketball and American football. The versatility of “crossovers” was tested, said Brown, and it was eye-opening to see the level of play from athletes hoping to win a gold medal for the United States.

“I know they’ve been athletes in their time and I’m sure it wouldn’t take much to get them physically into pretty good shape,” Brown said. “Unless they’re a complete standout when they come here, then they need to get that combination of conditioning and technical understanding right with also the fundamental skills.”

Two athletes made enough of impression on the coaching staff to warrant an invite to next week’s Men’s Eagles Sevens High Performance Camp, the fifth such Camp held during the tenure of Brown and Head Coach Mike Friday. A 12-man squad will be selected from the Camp, which will run at the Olympic Training Center Jan. 18-24, for Wellington Sevens, the fourth stop of the 2014-15 World Rugby HSBC Sevens World Series.