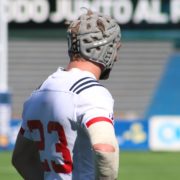 MONTEVIDEO, URU. – This was not the way the USA Men’s Selects had intended to close the Americas Pacific Challenge 2018. In a heavy battle against reigning champion Argentina XV, the Selects opened with fire but were ultimately ceased by way of a 55-15 loss to their opposition.

Inundated by mistakes in possession and challenged by a sharp Argentinian side who profited on every error, the United States conceded a collection of tries to finish sixth in the tournament.

The match concluded the developmental competition which saw many new players and capped Eagles play together, showcasing their skills for future senior team selections. Losses to Tonga A and Uruguay XV were both hard lessons for the Selects squad, allowing the mix of players to better understand the tenacity of international competition.

“These campaigns are about building experiences that prepare players for the senior national team. Sometimes those experiences are harsh but growth experiences nonetheless,” said Head Coach Scott Lawrence.

USA was first to get on the board courtesy of a try from Ryan Matyas who’s three total scores in the tournament have easily proven him as a stud along the wing. A penalty kick by Dylan Audsley allowed the Selects to move up to 10 points on the board, giving them a seven-point edge on the opposition.

Argentina XV’s first try came from a bobbled ball by JP Eloff that allowed them to find an immediate hole for the game-tying try. The play was a foreshadowing of the challenges to follow, displaying how crucial lapses in ball handling by USA were set opportunities for Argentina.

By the 25th minute, the match had turned into a strong kicking affair with both sides launching their fair share of chip kicks and grubbers across the field to outmaneuver the other. Neither side was able to convert the tactics to a score as penalties continued to transfer the ball back-and-forth each way. For almost ten minutes, play didn’t move past center field.

With minutes remaining in the half, Argentina’s deadly set piece formula flashed its root. A forward-moving maul and a wide hole allowed Argentina XV’s Favre to escape across the tryline to take the lead, 17-10. A copycat sequence ensued almost immediately after, when USA was punished by another maul that allowed the Argentinians to run away and dot down again, 22-10.

The Selects took a possession on the final play of the half — moving with strength — but a turnover resulted in more points for the other side, making it 29-10 at the end of the first.

At the start of the second, a loose ball by Argentina turned deadly, allowing the Selects to recover and move it quickly to the right flank — 5 meters from the line. Unable to do anything there, Nick Boyer redirected, Captain Conor Kearns made a swift underhand pass and Ryan Matyas saved the day. Matays tiptoed on the edge of the pitch, carefully staying out of touch to leap over and nail the score, 29-15.

Matyas’ score was answered almost immediately making it 36-15 before either team could catch a breath.

While the match wasn’t over yet, turnovers by USA and set piece dominance by Argentina XV filled the remaining minutes. Many opportunities to capitalize on possession were halted by losses and penalties that the Argentinians completely exploited.

Argentina XV then won three consecutive tries, torching the field first with their systematic maul play and next with two deep runs through open space. The final eight minutes of the game were filled with attacking moments for each team but the ultimate result was frozen in Argentina’s favor, 55-15.

Overall, it was a tough tournament for the United States who finished runner-up at the 2017 iteration of the Americas Pacific Challenge. Yes, the losses are an undoubted disappointment. However, the larger goal of giving first-hand exposure to new players and providing capped Eagles more playing time was well-achieved — especially in breakout performances by Ryan Matyas, complemented by stellar ambition from Mika Kruse, to name a couple.

Ultimately, the Americas Pacific Challenge 2018 was a vehicle for development as all six teams look to build depth for the upcoming Rugby World Cup Japan 2019. While significant areas for improvement were clearly seen through the course of the competition, the USA moves into the next phase of World Cup preparation with its eyes wide open and a clear-cut map to navigate to the finish line.