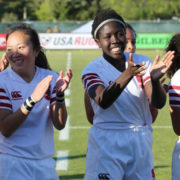 Boulder, Colo. – This Saturday, April 11, USA Rugby will be airing the Life-NYAC American Rugby Premiership match free on USA Rugby TV, the official YouTube channel of USA Rugby. The match is scheduled for a 1 p.m. Eastern kickoff and will take place at the Life University Rugby Complex in Marietta, Ga.

As two of the country’s premier teams, the Life University Running Eagles and New York Athletic Club (NYAC) have won six combined national championships since 2008, and share eight titles between the programs overall. This Saturday’s match will feature six players selected for the USA Rugby Selects tour of South America, and has the potential to feature as many as 23 players that have featured for national representative squads.

The American Rugby Premiership is a competition featuring five of the nation’s premier rugby clubs in three of the eight largest American markets. Bolstered by 12 capped Eagles and more than 40 players with national representative experience, the competition is recognized by USA Rugby as one of the nation’s top rugby championships. All five members have won at least one national championship at some level of play.

For more information about the American Rugby Premiership, visit americanpremiership.com. USA Rugby will be releasing a full preview of the competition Friday, April 10.