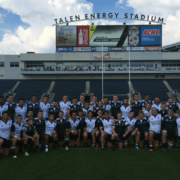 PHILADELPHIA, PA – On a warm afternoon at Talen Energy Stadium off the Delaware River, the AIG Men’s Collegiate All-Americans narrowly lost to the Oxford Blues in a well fought match to open the American Series.

“I’m very happy with the performance today,” said Head Coach Gavin Hickie, “after a week where the boys are just trying to gel as quickly as possible, I was very happy with how they played.”

In a first half of even play between both clubs, Oxford scored the initial try with a stretch over the line from #9 Sam Edgerley, to take a 7-0 lead. Cal Berkeley’s Nick Boyer would soon put 3 points in the US column after an offensive burst, leading to a penalty. Both squads moved the ball well into each opposing end during the early minutes, however goal-line stands kept the score low and the fans loud.

While one pick-off attempt from Arkansas State star Zach Young in the 19′ was called back due to an offside call, speedy Cristian Rodriguez of Lindenwood University intercepted the Oxford line shortly after, and broke away nearly 80 meters for the first All-American try. Boyer would miss the ensuing conversion, however down the line with just under 6 minutes left, he would pick up a long penalty kick to extend the lead, 11-7.

Determined to score before time expired, Oxford would turn a quick series into a try from Andy Saull. The Blues would hold a one point lead, 12-11, in closing the first half.

Following a brief halftime break, head coach Gavin Hickie called for an two substitutions bringing Chance Wenglewski and Brian McKellar into the mix. Visiting Oxford would leverage play in their favor however, with a try from #8 Will Wilson in the 45′. Again missing the conversion, the US found themselves in only a 6-point deficit.

After a flurry of substitutions from both squads, swift play and quick hands in the 53′, the American side would answer quickly as big Matthew Jensen of BYU found the try zone, bringing US fans to their feet. Duncan van Schalkwyk of Life University would make the conversion. With only 26 minutes left in full time, the All-Americans positioned themselves into an 18-17 lead.

Close and physical play would continue through to the 70th minute when both sides looked to the uprights for a late lead. The Blues however would be the only to convert, those points being the deciding factor in a 20-18 win.

After a tough loss, but impressive showing, Hickie recaps the week, “One and done, just one week, that’s why it’s all or nothing.” Commented Hickie on the young talent and Eagle hopefuls, “…now it’s on to the next level, that’s what we’re all about here”

Mitch Wilson of Life University was honored as The All-Americans Man of the Match, while Conor Kearns was recognized the same for Oxford.