World Rugby has today confirmed the rugby sevens match schedule for the hotly anticipated Youth Olympic Games 2018, in Buenos Aires, Argentina, with exactly one month to go until the competition kicks off.

In the men’s tournament France will defend the gold medal they won at the previous edition of the Youth Olympic Games in Nanjing, China in 2014, whilst the women will have a new Youth Olympic champion when the competition takes place over three days from October 13-15, at the Club Atletico San Isidro, sede La Boya.

The match schedule sees each of the six men’s and six women’s teams play five round-robin games before placing games during the sixth and final competition session on Monday, October 15 when the medals will be decided. In total 144 players aged 16-18 will participate in the rugby sevens event.

The women’s teams from New Zealand and Tunisia will share the honor of opening the sevens tournament in Buenos Aires, an event which promises to capture the imagination of young and aspiring players and fans around the world.

There will be two daily competition sessions with a 40-minute gap between each session in which spectators will be able to enjoy sports initiation and activities around the Youth Olympic Games. The repeat of the 2014 men’s final, in which France beat Argentina 45-22, will be played on Sunday, October 14.

The official match ball of the Youth Olympic Games was also unveiled today as members of the Argentina men’s and Colombia women’s teams were among the first to get their hands on the ball in the Youth Olympic Village and during training.

Rugby Sevens will feature for a second time in the Youth Olympic Games, a proven platform to develop and promote teams and players both on and off the pitch. Each one of the six regional associations of World Rugby will have a representative team in both genders, following a series of qualification tournaments in 2017 and 2018 and being confirmed and ratified by World Rugby and the International Olympic Committee.

World Rugby Vice-Chairman Agustín Pichot said: “The announcement of the match schedule is a major step on the road to the Youth Olympic Games rugby sevens competition, which begins in exactly one month. As a proud Argentinian and Olympic Games fan, I am looking forward to seeing the next generation of aspiring Olympic rugby sevens stars competing in my home city. There is a massive rugby following in Buenos Aires and I am sure that all of the players and their teams will be warmly embraced. It will be a fantastic experience and I would encourage all local fans to get their hands on a Youth Olympic Pass and enjoy the atmosphere.”

Olympic inclusion has had a huge effect on rugby sevens and been a game-changer for rugby as a whole. Following the sport’s successful introduction at the Rio 2016 Olympic Games it is estimated that the rugby sevens fan-base grew by more than 30 million as a result, with sevens instrumental in lowering the average age of World Rugby’s fan-base from above 35 to below 24 while expanding international reach, with emerging markets such as the USA, China, India and Brazil showing substantial growth.

Entrance to the event will be free but only for registered fans in the possession of a Youth Olympic Pass, an electronic bracelet that will allow you to enjoy and be part of Buenos Aires 2018. The Pass will allow the holder entry to all four Youth Olympic Parks, stadiums and stand-alone venues every day, attend the sports competitions and participate in over 1,200 cultural and educational activities.

Admission to the rugby sevens will be on a “first-come, first-served” basis until maximum capacity is reached. Rugby sevens is expected to be one of the hot tickets of the Games given the sport’s popularity in the host nation.

For more information on the Youth Olympic Games in Buenos Aires, visit www.buenosaires2018.com. 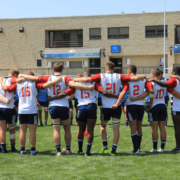 GLENDALE, CO. – Head Coach James Willocks and his staff have selected 30 student-athletes to continue to the next phase of the 2018 Men’s Collegiate All-American Selection Camp, where they’ll now compete for 1st or 2nd Team All-American honors.

After a day’s rest, camp will resume with seven additional collegiate players joining from Club 7s National Championships, as all athletes prepare for a full match against the Glendale Raptors on Friday, Aug. 17. The game is free to the public with kickoff set for 7 PM MT at Infinity Park.

Following two rigorous days of testing and training, along with two trial games, Coach Willocks and his staff conducted thorough evaluations to arrive at final selections from the original group of candidates.

“The staff and I are very thankful for the effort and attitude from all the players involved over the last few days,” says Head Coach Willocks. “Having to select only 30 from a very talented group was an incredibly difficult task. The standard of play over the course of the weekend bodes very well for the future of the collegiate game and USA Rugby.”

Overall, the camp has served as an invaluable opportunity for some of the nation’s top men’s student-athletes to showcase their talent in an effort to earn All-American honors — some of whom will likely continue their careers at the national team level.

The 2018 Men’s Collegiate All-American Selection Camp will conclude this Friday, Aug. 17 with the match against the Glendale Raptors, free to the public. Following the game, USA Rugby will announce 1st Team All-Americans in a special presentation featured on Facebook.com/USARugby. Details and a time will be confirmed closer to date.