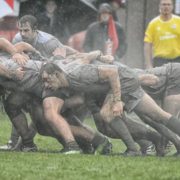 Over the weekend, in Bowling Green Ohio, it was a series of close encounters that ultimately led to St Joseph’s University and Mary Washington advancing to the final. St Joe’s came into the tournament as the 4 seed, and faced a challenging Tennessee side ready to make a statement in their first appearance in the Fall Playoffs. It was a tight match with one point separating them in the end, St Joe’s winning 13-12.

St Joe’s opponent in the semi-final would be the winner of Bowling Green (ranked 1) and the bottom ranked James Madison (ranked 8). In another tightly contested match up it was Bowling Green that prevailed 10-7.

The two teams then faced off on Sunday in what was shaping up to be a tug-of-war between two teams that both had legitimate title hopes. In the end, however, it was St Joe’s that triumphed 29-10. The first half was all one way traffic with St Joe’s scoring the first 12 point of the game, Bowling Green was able to bag themselves a try on the stroke of half time to end the first stanza down 12-5. Bowling Green continued the second half the way they finished the first, scoring a try in the 56th minute to draw the game within 2 points. Unfortunately for Bowling Green, the last twenty minutes was lopsided with St Joe’s running in 17 unanswered points to secure their spot in the Fall Final.

St Joe’s and Mary Washington will now face off on December 3rd to decide who will have a place in the National Championship in the Spring.

In the D2 playoffs it was mixed bag of results, with the round of 16 posting some close games including Grand Valley State edging out UW Milwaukee 28-27, and some blowouts like Virginia Military Institute’s 49-5 win over Rensselaer Polytechnic Institute. Other scores included in the round of 16 were UW White water defeating Pittsburg State 61-15, North Dakota State defeating Furman 31-15, Illinois State over Montana State 30-10,  Norwich beating North Carolina State 30-17 Hartford edging out Oswego 28-20 and Bloomsburg hanging on against UNC Charlotte 32-29.

The quarterfinals were all fairly uneven affairs with the smallest margin of victory being 12 points. The first quarter final of the day was between VMI and Bloomsburg. The first half was a close match up with VMI leading at the break 12-0, however, in the second half VMI kicked it up a notch outscoring Bloomsburg 31-5 in the second half to advance to the semi-finals 43-5. VMI’s opponent would be either Norwich or Hartford. After the first forty minutes it was an arm wrestle with both teams sitting on 12 points. In the second half Norwich blew the gates off scoring an unanswered 31 points in the first 30 minutes of the second half. Hartford scored on full-time to marginally close the gap, but it will be Norwich playing VMI for a place in the National Championship.

On the other side of the bracket UW Whitewater, the defending national champions, were squaring off against Grand Valley State, a program steadily on the rise. The game was a low scoring affair, with Grand Valley State trailing 7-5 at the half. UW Whitewater put their pedigree on display in first twenty minutes of the second half running in 17 points to put the game out of Grand Valley’s reach. Grand Valley didn’t quit though and scored a try two minutes into stoppage time, causing the final score line to read 24-12 Whitewater. North Dakota State and Illinois State faced off in the final quarter final to decide who would play UW Whitewater. In another low scoring match North Dakota State advanced after scoring all of their 21 points in the first 30 minutes of the game. Their defense did most of the work for them only conceding one try 55 minutes into the game. Whitewater will have their work cut out for them when they play North Dakota State in Furman.