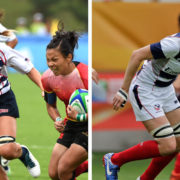 Farmer has been training at the Olympic Training Center as a Resident since May 1, bringing the veteran leadership of a capped 15s Eagle and Women’s Rugby World Cup 2014 selection. Suggitt has previously praised the maturity she exudes in the training environment in the presence of younger players, like Stephens.

“[Carmen’s] been a great student of playing sevens,” the head coach said. “Since she’s been here, the length of her pass has really increased.

“She’s an intelligent athlete. What we need now is to get her game experience. We get simulated game experience at the Training Center but it’s not going to be anything like getting on the field and actually having to play where there’s something of real value.”

Stephens may not have a World Rugby Women’s Sevens Series cap, but the 18-year-old is no stranger to representing the United States in international competition. At Rugby Sevens’ Olympic debut at the Nanjing 2014 Youth Olympic Games last summer, the Fallbrook High School standout was nominated to lead the 92-member U.S. Youth Olympic Team congregation in the tournament’s Closing Ceremony.

Though the women’s rugby team finished fourth at the Youth Olympic Games, Stephens and nine other Youth Olympians were selected to the first-ever USA Rugby Girls High School All-Americans powered by Serevi, which competed in the U19 Elite International Girls 7s division at the 2015 Las Vegas Invitational.

“What an honor,” Suggitt said of the fly half’s duties in China. “She’s had a taste of it. Now she’s going to have to shoulder a responsibility; she has some big shoes to fill.

“She’s been coming out to the Training Center since she was 15 years old and has been performing quite well at all of the camps. She has really good vision, a good pass, she’s a good kicker, and a great tackler.”

A minor injury to Bui Baravilala in the pre-NACRA Sevens Camp will most likely move Stephens into the starting seven, while Lorrie Clifford, Melissa Fowler, and Dana Meschisi are inserted into the travel squad to give a few players rest ahead of this summer’s Pan American Games in Toronto.

The Eagles have not seen any of their three Pool A opponents on the circuit in its short history, but the team has been able to prepare for matches against the entire NACRA Sevens field with film.

“There’s no way in the world that we’re going to send a team there and underestimate who we’re playing against,” Suggitt said. “That’s not happening.

“Rest assured, we’re not taking it lightly. We have good enthusiasm and good leadership inside the group.”

The pre-NACRA Sevens Camp was attended by a number of younger players in addition to those in Residency, and Jillion Potter returned to her old stomping grounds to “raise the intensity level around the training field,” Suggitt said. It is unlikely Potter will be available until the beginning of the 2015-16 Series, but she will rejoin her teammates at the Olympic Training Center full-time.

“’Potts’ brought back a real, genuine joy of coming out and running around and playing the game on the park,” Suggitt said. “It’s been fabulous to have her back and give the girls a proper send-off to a competition.”

The Eagles will begin their regional qualification campaign against Jamaica at the main stadium at WakeMed Soccer Park Saturday, June 13, at 11:44 a.m. ET. Tickets are still available in single-day and weekend packages and can be purchased on the 2015 NACRA Sevens Championships event website.