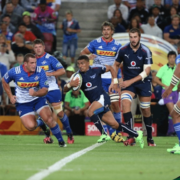 LOS ANGELES, CA – After a successful and exciting 2017 season, Super Rugby will make its debut in the United States on Friday, Feb. 3 at StubHub Center in Los Angeles when the Vodacom Bulls and DHL Stormers travel to Southern California for a preseason matchup, featured LIVE on The Rugby Channel. Tickets for the match, part of International Rugby Saturday, begin at just under $28 and are currently available for sale by visiting usarugby.org/tickets.

Undeniably an entertaining event, Super Rugby brings a highly anticipated dynamic to a Southern California market that has seen tremendous growth in rugby over the past year. With participation and overall interest in the sport continuously rising, the Bulls and Stormers have the opportunity to target an engaged community, showcasing an elite level of play and advancing the sport as a whole.

Dan Lyle, Director of AEG Rugby — who worked directly with Super Rugby to bring the event to America — was enthusiastic about how International Rugby Saturday will impact the U.S. market.

“Super Rugby not only represents 5 countries with strong rugby pedigrees who have cultural ties to the United States; as a league, it represents a dynamic style of the sport that will appeal to U.S. sports fans,” said Lyle.

A former Eagle himself, playing  from 1994-2003, Lyle understands the many facets of sport consumption and how the event will serve as an important highlight to one of them.

“While the broadcast of sport is paramount, experiencing the pace and power of rugby first hand  and in person is second to none,” says Lyle.

Originally beginning with 12 teams, Super Rugby, also known as SANZAR Rugby, formed in 1996 by representatives in three strong rugby markets including New Zealand, South Africa and Australia (SANZAR). SANZAR’s goal was to capitalize on interest in the professionalism of the sport by providing a premiere international program that featured a superior level of competition. Since then, broadcasters, fans and countries around the globe have seen an extensive value in Super Rugby, expressing their desire to establish new teams, broaden viewership and attend events.

From the early 2000s, SANZAR has seen a rise in Super Rugby that expanded its offering from 12 teams by the end of 2005 to 18 at the start of 2017 with Japan and Argentina joining the rotation. In order to balance the interest from new and existing markets, continuing to ensure an efficient business model for future success, SANZAR introduces a new structure of play for the 2018 season.

Reducing competition to 15 teams while preserving their expansion into the Asian and Argentinian markets, Super Rugby will begin 2018 with two less teams from South Africa and one less from Australia. In their renewed model, each franchise will play opponents in their conference twice (one home, one away), as well as four teams from the remaining two conferences (two each) to accumulate points in their overall hunt towards a Finals Series run.

Rivals from the Africa 1 Conference, the Bulls and the Stormers play each other twice every season, with the Stormers taking the last two matches for a
37-24 and 41-33 victory. Serving as 2 of 15 teams in Super Rugby, the Stormers and Bulls join other premiere teams from New Zealand, Argentina, Japan and Australia to comprise a franchise that has represented a model for successful advancement of the sport throughout the world.

The contest between the Bulls and the Stormers will mark the first Super Rugby match in the United States. Impressive growth in the sport through Southern California, paired with the success of Super Rugby, creates an atmosphere that is sure to entice audiences at StubHub center.

“This trip comes at a vital time for us, as we will be far into our pre-season preparations for the 2018 season and there’s no doubt that members of our squad will be looking to assert themselves,” said Mitchell.  “Rugby lovers attending the double header, can expect to be entertained by these to Super Rugby giants.”

Kickoff between the Bulls and Stormers is set for 3 PM PT at StubHub Center in Los Angeles, California on Fri, Feb. 3, with tickets available for sale starting at just under $28. The contest will precede the opening match of the Americas Rugby Championship between defending champion United States and runner-up Argentina XV at 5 PM PT. Both matchups will be featured LIVE on The Rugby Channel with updates available by following @USARugby on Twitter.