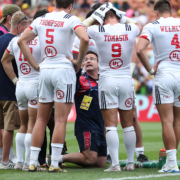 SYDNEY, AUS. – Tied at No. 1 and hungrier than ever for a gold medal finish, the Men’s Eagles Sevens will take on the fourth stop in the HSBC World Rugby Sevens Series 2019 at HSBC Sydney Sevens Feb 1-3.

Taking their third-straight silver medal in Hamilton last weekend, the United States men will battle it out against France, Kenya and rival-Canada for another chance at the Cup, LIVE on watch.espnplus.com.

A devastating injury to two-time World Rugby Sevens Player of the Year Perry Baker was a loss for the Eagles Sevens. But the squad proved to be more resilient than ever with an unbeaten run in pool play to seal a place in the Cup Quarterfinals.

A 29-7 victory over Tonga — where Baker was injured — opened the tournament, after which an even stronger 34-14 showing against Samoa followed. A final 19-7 win over England claimed first place in Pool B where the USA looked ahead to face Scotland in the Quarterfinals.

There, the Scottish were overcome 19-14 despite numerous penalties that had fans in FMG Stadium Waikato on the edges of their seats to see who would emerge victorious. And with the Americans still on fire, home-team New Zealand was equally overcome by a 17-7 result that led the USA to their third straight Cup Final.

Facing 2016 Olympic Champion Fiji, the United States had their work cut out for them. The Fijians played as good of a match as they ever have — almost better, in fact — clearly indicating it would take nothing shy of perfection from the other side to have a chance at the win. The Eagles Sevens were ultimately taken by a 0-38 loss but left New Zealand still tied for first-place in the rankings and determined more than ever to claim Gold.

Thanks to their breakout performances, Ben Pinkelman, Carlin Isles and Folau Niua were named to the HSBC Dream Team last tournament.

Playmaker Folau Niua’s Dream Team nomination was his first and a long-overdue honor in his 62 tournament career. The playmaker will make his 63rd World Series appearance at Sydney Sevens, passing Zack Test and becoming the most-capped Eagles Sevens player of all time.

Undeniably fast and unstoppable on the edge — it comes as no surprise that Carlin Isles massively stepped up in the wake of injury at New Zealand Sevens. But the athlete had much more to offer last weekend than fast runs around the outside and breakaway tries. Isles used his speed to capitalize on defense chasing down ball carriers with pace and making tackles no one could expect.

Like Isles, Captain Madison Hughes is another who couldn’t be stopped in Hamilton. Hughes scored four tries over the weekend with his impeccable timing and precise identification of space. Including conversions, the Captain scored 39 total points in New Zealand.

And, with Perry Baker out, Matai Leuta has flown into Sydney to suit up with the team. Leuta was with the Eagles Sevens for their first two silver-medal finishes and owns four total tries in 2019.

France, Kenya and rival-Canada will be no easy test for the United States. The No. 12 ranked French will be up first on Friday, Feb 1 at 6:06 PM ET, taking on the USA men for the first time since Paris Sevens 2018. The Eagles Sevens prevailed in that matchup with a 26-12 result.

Next up will be No. 13 Kenya who last faced the Americans at London Sevens 2018 where both teams drew. The Kenyans previously claimed wins over the Eagles Sevens in Singapore and Canada which makes a win in Sydney that much more of a statement for USA.

No. 11 rival-Canada will be the final matchup of Pool B. The epic North American rivalry last took place at London Sevens where the United States took a 27-19 victory.

All matches may be streamed LIVE on watch.espnplus.com.

On making three-consecutive finals…
“It’s bittersweet after the last weekend. Yes we are pleased to make three finals but are hugely disappointed we didn’t win the cup which makes us all the more determined to try and kick on.

“Fiji were better on the night and everything stuck for them. While there are a few things we may have done differently, Fiji didn’t allow us to play and made us pay for every mistake which is how 7’s can go. That is what we did to them in Dubai so we need to stay grounded and move forward to the next challenge.”

On facing three opponents in pool play for the first time this season…
“Hugely tricky group this week with three very physical and tactically different teams to face who are all set up to cause us real problems. A big physical French team, a North American derby as well a traditional warrior battle when we face Kenya.

“We will need to be at our best Day One, first and foremost physically and then also tactically smart to play the style of games that highlight our strengths in an uncompromising weather climate. Resilience and grit will be needed in bucket loads.”

Still with a top placing but tied for No. 1, Sydney Sevens will be a critical tournament for the United States. Facing three teams in pool play whom they have yet to play this season will come as no easy battle, especially after three consecutive Cup Final appearances have positioned the Americans as the team to beat. In many ways, the upcoming weekend will be the ultimate test.

Pool B | Broadcast LIVE on ESPN+