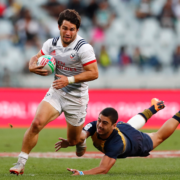 HAMILTON, NZ. – After back-to-back medal finishes — and a No. 1 world ranking for the first time in history — the Men’s Eagles Sevens will travel to the third round of the HSBC World Rugby Sevens Series 2019 at HSBC New Zealand Sevens. Taking place Jan 25-27 (based on Eastern Time) and broadcast LIVE on ESPN+, USA will face Tonga, Samoa and England in pool play.

A thrilling start to the season paved the way for the Men’s Eagles Sevens to build on their momentum at Cape Town Sevens 2018 (Dec 8-9) and secure a silver medal.

Bursting into the tournament with a 54-0 shutout victory of Japan, the United States followed up with a 38-17 defeat of Spain and 31-14 win over Argentina. In the Cup Quarterfinals, the Eagles Sevens fought to the final minute against England to come away on top 19-12 and meet New Zealand in the semifinal.

Burning from their loss to the All Blacks Sevens in the Cup Final of the previous round (Dubai Sevens), the USA delivered a more than smashing performance, scoring five tries in route to a 31-12 win.

In the end it was 2016 Olympic Champion Fiji who walked away with the gold medal in a 15-29 result; but not before the USA launched a second half-comeback which, unfortunately, fell short of leveling the final score.

Still, the Eagles Sevens had claimed their second-consecutive silver medal for the first time ever and moved to No. 1 in the World Series standings — one point ahead of No. 2 New Zealand and eight points ahead of No. 4 England.

Head Coach Mike Friday has named a full squad of 13-players with a starting 12 to be named closer to date.

Among them and not to be overlooked in Hamilton is Ben Pinkelman — a staple of the Men’s Sevens program.

Pinkelman’s crucial pass to Danny Barrett in the Cup Semifinal against New Zealand set the athlete up for a monster try that would ultimately make ESPN’s SC Top 10. The Eagles Sevens player also accounted for two tries in the Cup Final against Fiji which helped spark the USA offense despite an unfortunate final result.

Named to the team for the first time in just under two years is Anthony Welmers who last appeared at Singapore Sevens 2017 and is part of the Army World Class Athlete Program (WCAP). Welmers has since competed on several developmental Falcons tours, fighting through untimely injuries and working tirelessly to advance his core skills as part of the Men’s Sevens Residency Program.

Pat Blair — also part of the AWCAP and rostered with San Diego Legion — is named to the 13-player squad after last appearing at Canada Sevens 2017 and serving as an injury reserve for Rugby World Cup Sevens 2018.

The USA opens New Zealand Sevens with a battle against invitational team Tonga on Fri, Jan 25. Tonga and the United States last met at the developmental Silicon Valley Sevens in November of 2017 where Mike Friday and his squad prevailed 29-7.

Samoa will be next, facing the Eagles Sevens for the first time since the Americans historic championship run at USA Sevens 2018. The Samoans are currently ranked 10th in the World Series standings.

Day One will close with the biggest battle of Pool B when the United States faces fourth-ranked England.

On the holiday break…
“The holiday break from a rugby perspective probably came at the wrong time with the momentum we had but that is the nature of the beast and we knew that was coming. The boys enjoyed the holidays and we have been back to work these last two weeks picking up where we left off and getting back into the rhythm of training and preparing for these notoriously tough two legs.”

On being ranked No. 1 in the World…
“We know we can take nothing for granted and whilst we are pleased to be sitting number one currently it means very little in the grand scheme of things as we have a tough eight legs ahead and everyone will be coming for us. We need to stay focused, show humility and work hard on our own game individually and collectively as we lost two finals due to mistakes which were more than avoidable. We still have much to prove to ourselves when we take the field in Hamilton in what is a very physical and difficult group.”

The United States currently sit in their highest ever position in the World Series standings just two rounds into a 10 part season. Olympic qualification is still — as it has always been — at the helm of the squad’s endeavors, but with the rankings on their side and full steam ahead, the team now eyes much more than a Top 4 finish. Tonga, Samoa and England will all be a test to see if the team on fire can continue their stride as the next phase of the HSBC World Rugby Sevens Series commences.

*Match-day 12 to be named closer to date.

Pool B | Broadcast LIVE on ESPN+