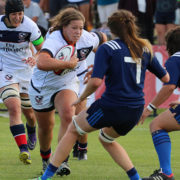 At just 23 years old, Hope Rogers has become one of the more dominant ruggers in the game. A leader on and off the pitch, Hope is proud to represent the United States internationally. Learn more about Hope, and discover how you can support athletes like her in achieving their dreams.

If you’ve seen highlight reels from any of Hope Rogers’s matches, you know that she is a force to be reckoned with on the field. She is aggressive, dominant and all-around intimidating. But in speaking with her off the pitch, a different picture of Hope forms. When first getting to know her, there are a few traits that become apparent almost immediately – not only is she intelligent, humble and passionate about the game, but she is also warm, charismatic and insightful beyond her years. Though her first international cap was earned only three years ago, Hope has quickly become a leader among the Women’s Eagles and within the broader rugby community.

Hope began playing rugby in high school and admits, “My first game, I had absolutely no idea what I was doing. I was running around like a chicken with its head cut off tackling people.” Despite this initial confusion, Hope fell in love with the game and set her sights on the international stage. After trying out for the AIG Junior All-Americans in 2011 and missing a spot on the roster, Hope dedicated herself to capitalizing on her potential and achieving her dream. She soon became a standout on Penn State’s team and was even named Most Valuable Player at the 2014 USA Rugby Women’s Collegiate Division I National Championship, where Penn State earned the national champion title.

Hope’s hard work paid off quickly. Her first-ever international match with the Women’s Eagles came in 2013 against France. She recalls, “The game is so fast at the international level, my only thought was to keep up. When my first contact point came in the game, I had to tackle their number 8, who was probably the biggest girl on their team. I made the tackle and thought, ‘welcome to international rugby, Hope.'”

A model of tenacity and hard work, Hope was soon recognized as an impressive leader. This year, Hope was not only selected to serve as captain during the Women’s Eagles tour in France, but was also named the first-ever winner of the Sorensen Award, which honors the best female collegiate rugby player in the country. The award is named after MA Sorensen, a former prop for the United States who played in the 1991 World Cup and is a current coach and successful doctor. “I had the honor to meet [Sorensen] at the award ceremony and she is an incredible woman that truly inspires me,” says Hope.

Outside of rugby, too, Hope serves as a role model. She graduated from Penn State in 2015 with a degree in Childhood and Early Adolescent Education, and says working with children is what she loves doing most, so in addition to her rigorous rugby training schedule, Hope works at a preschool. Despite her already packed schedule, Hope also works at a restaurant as a server to make additional money to help cover some of the costs associated with playing rugby. “We have to pay our way to camps and we have camp fees. While we’re at training camps, we aren’t able to work, which makes it challenging,” Hope explains. Though the national teams do receive grants from World Rugby, it is a necessity for most athletes have other jobs to support themselves financially. While Hope is grateful for the funding her team receives, she recognizes that there would be greater opportunities for them if funding were increased. “When rugby fans donate to USA Rugby Trust to build funds for USA Rugby, it makes a HUGE difference,” she says. “I am truly grateful for the funding we receive, but it can still be challenging at times. We don’t get to play in nearly as many international matches as the top women’s countries in the world, and it does make a difference in building a successful team. I truly believe that the USA Women’s team has the ability and talent to win and be successful, but we just don’t get the opportunity to play with each other often and build that cohesiveness. I really do appreciate all that we are given; I just think we could be a much better team overall if we had the funds to implement the ideas that would help us get there.”

Though she has to work two jobs in order to financially support her rugby dream, Hope’s pride in representing her country is what keeps her moving forward. She says, “My favorite part is probably standing side by side with my teammates listening to the National Anthem playing before the game. It’s knowing that you have an opportunity to represent your country, the people who have come before you, the people who are still to come after, your friends and family, God, and yourself.” She also sees a bright future for rugby in the United States. “It brings a smile to my face to see many more youth programs and high school programs starting, and collegiate programs are becoming better funded and more competitive,” she explains. “I believe the national teams are slowly becoming more successful, and with added funding, I know we can continue to improve.”

Do you want to support players like Hope in achieving their rugby dreams? By making a tax-deductible donation to USA Rugby Trust, you can directly contribute to our national teams, helping athletes like Hope receive the training and financial support they need to become the best ruggers they can be. Please consider making a gift to USA Rugby Trust before the end of 2016.