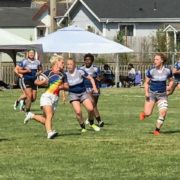 TACOMA, WA- It was a hot day in Tacoma, Washington.  As the thermometer pressed above 90, so did the intensity of rugby 7s at the Pacific Coast Championship. The organizer and Coach of the hosting Tacoma Nomads, Ryan McHugh noted that this was the “Best Pac Coast Championships in both the level of competition as well as attendance we have had in Tacoma.” The fierce competition was witnessed by many including several MLR 2018 Champions Seattle Seawolves players and the legendary Waisale Serevi.

Northern California Rugby Football Union (NCRFU) was represented well with three teams while Pacific North Rugby Football Union (PNRFU) was represented by two clubs in the men’s qualifier.  All teams played four games with the top two meeting in the final, where only one team would advance to nationals. Washington Athletic Club (WAC) started the day with a win over Sacramento Capitals 24-7, while the other Washington side, Ronins, fought to a draw with Olympic Club 5-5.  Life West decisively handed Sacramento it’s second loss 22-0, Followed by WAC over Ronins 12-7, in a close, defensive battle.  Olympic Club put some points up, but fell short to Life West 17-24.  Life West played again a little over an hour later, picking up their 3rd win, keeping Ronins winless 21-12.

As the heat plateaued in the higher 90’s, the heat could have slowed teams down, WAC apparently wasn’t affected, putting  on a try-scoring clinic in a 35-7 drubbing of Olympic Club.  Sacramento scored early, which proved to be the secret in a win over Ronins 17-19.  With Life West and WAC both sitting at 3-0, and the other 3 teams having only one win among them, it was very clear which teams would fight for the single spot representing the Pacific North at nationals. Life West would prove their dominance in a opportunity-rich 26-5 victory over WAC, which would set the tone for the final between the same teams.  A full 8 hours after their first game, WAC would put on a strong performance.  Life West fought hard but could not erase the deficit losing their only game of the day and sending WAC to nationals 24-14.

Both NCRFU and PNRFU were represented evenly by 2 women’s sides each, with three of the four able to go to nationals. It would boil down to who would capitalize on the mistakes made.  Life West showed their dominance early, in a demanding victory over Berkeley 30-7, while Oregon Sports Union (ORSU) would fall to Washington Athletic Club (WAC) 10-19.  Life West compellingly prevailed over WAC 35-14, while Berkeley squeaked by ORSU 10-17.  Life West remained unbeaten, handing ORSU their 3rd loss 26-5, While WAC beat Berkeley in a decision that would solidify the finals, 21-12.  In the women’s 3rd/4th place final, the theory was that even though ORSU remained winless throughout the pool play, with a win, they could grasp the third sport to nationals out of the jaws of defeat.  However, the jaws remained clenched in the form of a loss to Berkeley, 12-28.  The final saw another matchup between Life West and WAC.  Both teams showed poise and defense, despite the long hot day, and Life West once again came out on top 24-12.  Life West, WAC and Berkeley will all head to nationals.