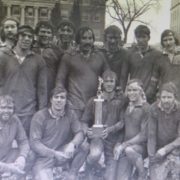 Indifferent to which university Baigent was employed, he always carried an undeniable commitment to support the students and the game. Baigent had devoted his professional career to improving access to higher education and ensuring that students were equipped with the tools needed to reach their career goals. Despite what would be perceived as a full workload, Baigent still found time to give back to his favorite sport.

Syracuse University head coach Robert Wilson echoed Baigent’s dedication to the rugby clubs, “His initial founding drive, administrative and financial support has now taken on its momentum as these clubs go from strength to strength and participate in national and international competition” he said.

The Inaugural Peter Baigent Cup took place early September amongst the two D1A rivals. This year, Stony Brook University Rugby hosted Syracuse University Rugby Football Club; however, it is planned that the venue will alternate between the two universities for matches to come.

USA Rugby Interim CEO, Ross Young added, “It’s well documented how important Peter was to the game overall, but his influence with these programs in particular was truly special for him. It’s very fitting for this annual match to tribute his legacy.”

As to be expected, the newly established game upheld a respectable match that encompassed all the values that Baigent believed rugby modeled. During the first game of this series, both English and United States flags were flown in honor of the England native. Syracuse would claim the first win in 2018, with a 46-10 victory.

“This is a very appropriate and positive way to recognize one of the founding members of USA Rugby on an ongoing basis” Wilson concluded.