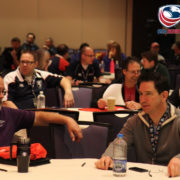 CHICAGO – USA Rugby’s National Development Summit is a unique weekend that brings together a collective group of rugby enthusiasts who are eager to share philosophies, debate topics, and, most importantly, learn.

The massive rugby convention of sorts witnessed more than 500 people assemble in Rosemont, Ill., this past weekend, most of which were either rugby administrators, coaches, players, referees or any combination of the four. With speakers ranging from National Team coaches Mike Tolkin and Pete Steinberg, to the most capped Women’s Eagle of all-time, Jamie Burke, to 2007 Rugby World Cup Final referee Alain Rolland, NDS provides an opportunity for personal development for just about anyone who has a passion for rugby.

While goose stepping from one conference room to another and meeting dozens of attendees along the way, it was apparent that many of the NDS partakers were returning guests to the annual event. One reason for the returned attendance of particular guests is the evolving subject matter from one Summit to the next – this year’s focus included the Women’s Rugby World Cup that recently took place, and the men’s tournament that will kick off in September 2015.

Another reason some folks in our rugby community find themselves returning to this distinct event is the sudden change in roles they take on within the sport.

One person who has recently gone through a transition in the rugby portion of her life is Director of Stars Rugby 7s Liz Entwhistle. The evolution from player and coach to a select side organizer and administrator had her seeking knowledge and influence to better prepare the teams she leads on tour.

“As an administrator, planning for the unplanned is important,” explained the Stars founder. “Unpredictable elements will always occur on tour, so we need to prepare for those as a staff, and ensure our players are focusing solely on playing the game.”

“To hear first hand what the World Cup cycle is like for high performance athletes – to prepare both mentally and physically – is going to influence our future tours and setups,” continued Entwhistle. “We’re looking to mimic the same kind of scenarios our National Teams are put through, so to learn from experts in these subjects has been hugely beneficial.”

Like Entwhistle, former Men’s Eagles 15s and Sevens star Kevin Swiryn is in the midst of a rugby evolution. The former AIG Men’s Collegiate All-American out of Saint Mary’s is transitioning from international rugby player to collegiate coach after taking over the men’s program at the University of Washington this past summer. With loads of elite level rugby under his belt, and learning from the very best coaches in America and abroad, Swiryn admits the transition from international playmaker to college coach has been more difficult than originally anticipated.

“My challenge has been that when I stopped playing, which was at an international level, I came into coaching at a level much different than the setups I was accustomed to as a player,” said the former Men’s Eagles Sevens captain. “So, the difficulty has been this transition of being an elite level player, to a much lower level conceptually as a coach.”

Keeping busy with duties relating to his place on USA Rugby’s Congress, Swiryn still made time to sit in on a majority of the coaching lectures in order to “get an idea as to what is being talked about in the coaching community.”

High school-grade rugby players were well below the mean age of NDS participants, but there were still dozens of teenagers in attendance, and in large part to gather information from colleges that set up booths at the Rugger’s Edge College Fair.

Coach Kevin Drewyer and three of his players from Chicago Hope Academy enjoyed their time spent with coaches representing not only some of the best rugby programs in the country, but also the finest universities in America.

“The reason I came here today was to visit colleges because it’s a goal of mine to continue my education while enhancing my rugby skills,” said Chicago Hope winger Rashad Johnson. “I want to major in business, so I’m curious to know which of these schools has a good business program to fit my academic passion, and I want to see if any of these schools could be a second home to me.”

The approach taken by Drewyer and his teammates is a very mature and proactive one, but also very specific to their place within the community – a high school rugger who would like to continue playing in college. Brian Zapp, who has been officiating rugby for the last decade and was a player for six years prior to picking up a whistle, believes the event is impactful because members representing all aspects of the sport mingle and supply feedback throughout the weekend.

“It was very beneficial to get all of our national referees, national referee coaches, and performance reviewers under the same roof to discuss the topics of emphasis within law,” said the National Elite Panel referee. “Not only that, but it was also beneficial to open conversation up to coaches and other rugby representatives to make sure we are in touch with what they would like to accomplish.”

The weekend Summit, which held 42 separate presentations on Saturday alone, appears to be an important tool in gathering information within individual pockets of the rugby community, but also a collective resource so those pockets can have a better understanding of what one another does and how they are evolving.

“It’s definitely an honor to be part of this conference because it is the backbone of USA Rugby, and it really does take that balanced influence of administration, players, coaches, and referees to continue the growth of the game,” Zapp relished. “To be able to have this conference and have everyone under one roof is pretty impactful for the sport, and something that a lot of other nations probably don’t get the opportunity to do.”

Planning for the 2016 NDS – which will be the event’s 10th rendition – is already well underway with the San Francisco Bay Area appearing to be the likely location for next year’s Summit.