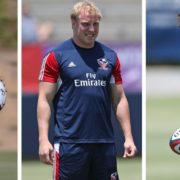 TBILISI, GE. – A 46-17 win against Germany leads the Men’s Eagles to Tbilisi for their final test match of 2017 against the No. 12 World Ranked Georgian Lelos this Saturday, Nov. 25 at 9 AM ET, live on The Rugby Channel. A win at Lokomotivi Stadium not only allows the Americans to redeem their 21-17 loss to the Lelos from the Summer Series in June, but more importantly an opportunity to rise in the World Rankings from their now No. 17 position.

“We are really looking forward to the rematch with the Georgians,” said Interim Head Coach Dave Hewitt. “Knowing how passionate they are about rugby will add to a game that should be exciting to watch.”

The Georgian squad, who comes off a 13-6 loss to Wales, will face an Eagles team who scored four tries in the second half of their most recent victory against the Germans. Now facing one of the toughest scrums in the world, the United States will call upon flanker John Quill and standout No. 8 Samu Manoa (RC Toulon) whose physical ability and undoubted athleticism bring an important dynamic to the rotation.

“We know the Georgians are a tough physical team. We need to make sure our mindset is strong, play our style and bring our flair to give us an opportunity to be successful,” says Hewitt.

Back on the pitch are scrum half Shaun Davies (Glendale Rugby), fly half AJ MacGinty (Sale Sharks) and wing Ryan Matyas (Old Blue New York), suiting up alongside Captain Blaine Scully (Cardiff Blues) who joins the former three in contributing to the 46 Eagles’ points scored in Wiesbaden, from the fullback position.

Proud of his team’s last performance and aware of a competitive matchup ahead, Coach Hewitt is confident his squad has the mindset they need to challenge the Lelos.

“It was great to have the physical encounter against the German team. It showed us areas we needed to work on in our performance,” he said.

With returners conditioned for the Georgians, Mose Fuala’au (Life West) will depart as planned as well as David Tameilau (RC Narbonne) through injury.

Saturday’s contest between No. 12 World Ranked Georgia and No. 17 World Ranked USA will kickoff at 9 AM ET from Tbilisi. The match will be featured live on The Rugby Channel with updates available by following @USARugby on Twitter.

Hewitt and his squad will take this final opportunity to improve their No. 17 position before the end of the year, after which the team will take a few months off the pitch before their 2018 debut at the Americas Rugby Championship in February.