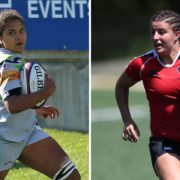 LAFAYETTE, Colo. – The USA Women’s Eagles are in camp at the Chula Vista Elite Athlete Training Center June 4-10 ahead of a month-long camp in Southern California June 25 – July 23 and Women’s Rugby World Cup 2017 in Ireland Aug. 6-26.

Forty-one athletes have been invited to the June Camp, the main selection vehicle for Head Coach Pete Steinberg’s World Cup squad. In addition to 23 of the athletes that assembled in Chula Vista for the recent Can-Am Series, the Eagles are welcoming the return of several previously-injured and -unavailable players for the week-long assembly.

“This is the final selection camp for the World Cup,” Steinberg said. “We have been tracking these players for years through the sevens, NASC, and age-grade programs, and the goal is to give them an opportunity to show what they can do on and off the pitch. The camp is designed to be difficult for the players, because it allows the players who can perform while there are distractions to show what they can do. This is a learning from the last cycle, that we need to not make it easy, because the World Cup is one big distraction.”

In their first full Eagles camp outside of the National All-Star Competitions held during the shortened World Cup cycle between 2014 and 2017, the players are staying in local apartments and houses, necessitating camaraderie in aspects of eating, laundry, etc. This will allow the coaches to identify who can handle the two months the players will spend together this summer.

The U.S. was challenged in set pieces against third-ranked Canada last month, and have recognized the forwards could do more to exploit a dangerous set of backs. The tight five forwards in Southern California will remain for two days following the June Camp with Assistant Coach Liz Kirk to get some focused time on the scrum.

Included in the backs is a host of capped Women’s Eagles Sevens players that have trained full-time in Chula Vista with Sevens Head Coach and XVs Assistant Coach Richie Walker, like the national team’s leading points and try-scorer on the 2016-17 HSBC World Rugby Women’s Sevens Series, Naya Tapper. Sevens captain Alev Kelter – second all-time in Series points scored for the Eagles – made her international debut in France last fall and played 160 minutes in the midfield against Canada this year alongside four additional Team USA Olympians.

The age-grade programs have also provided a number of players to the camp including Danielle Ordway and Kat Ramage, who have both starred for the AIG Women’s Junior All-Americans and AIG Women’s Collegiate All-Americans.

“The age-grade teams are really beginning to provide the future players for the program,” Steinberg said. “This injection of young athletes, along with the development of the NDAs, has created a much deeper pool than in 2014.”

While the sevens athletes have benefitted the XVs program, the new XVs residency in Chula Vista has had a similar effect on the sevens team. Pankey, injured during the Can-Am Series, played a solid role for Walker’s side at HSBC USA Sevens in March after Hope Rogers made an impact in the team’s runner-up finish at HSBC Sydney7s and before Jordan Gray made a Series appearance in Japan.

The continuity between the programs will continue through the summer as the final leg of the Series will be held in France June 24-25. Upon its conclusion, athletes pegged for Steinberg’s World Cup pool will remain in or relocate to the Chula Vista area. A friendly warm-up match against the Women’s Premier League All-Stars is scheduled for July 1 in San Diego, while the final World Cup squad will travel early to Dublin thanks to the sponsorship of Irish Rugby Tours. More information related to summer plans will be released in due course.