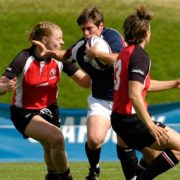 Franck Boivert’s final game in charge of the Eagles was the Women’s Rugby World Cup 1998 Final, a loss to the resurgent, skillful Black Ferns of New Zealand. With the U.S. accumulating a 14-4 record in two World Cup quadrennials – reaching both Finals – Boivert’s legacy was placed in the interim hands of assistant coach Joe Kelly.

In the near-15-month layoff after the World Cup, Kelly brought on several recently-retired-from-international-duty Eagles – including Kathy Flores, Krista McFarren, and Candi Orsini – to the coaching staff as Directing Officers to assist in the identification and selection of national team players (in addition to assistant coach duties). For the first match post-’98, a ’99 “friendly” against Canada in New York, eight members of the starting XV earned international debuts. Two additional players, including Phaidra Knight, debuted from the bench.

There was enough experience and know-how in the team to see out the U.S.’s ninth victory in the Can-Am rivalry, but the talent in the player pool was noticeably lacking relative to the Eagle teams that came before it. When they traveled to New Zealand for the Triangular tournament two months later, a similar squad allowed the streak to end before another hefty defeat to the Black Ferns.

“He handed off a lot of the responsibility for that New Zealand tour to his DOs,” Knight recalled of Kelly, who distributed the staff leadership to increase their experience levels as much as his players’ with plans of a full-time hire in the works by the governing body. “But it was helpful; just getting that experience was key.”

If the Eagles were on a downswing talent-wise, a coaching and philosophy change two years out from the World Cup was only going to marginally improve the program in a best-case scenario. Following a second loss to Canada in the summer of 2000, Martin Gallagher was hired to lead the program. A longtime director of rugby and national team head coach in Swaziland with experience within Argentina’s rugby union, Gallagher’s first assignment was the ’00 Canada Cup, where England and New Zealand again brushed off the Eagles.

Gallagher’s only saving grace in his first few months as head coach was stopping a Canadian streak to finish off the competition 1-2. In the months and years to follow, he would prove to be a divisive and somewhat underprepared leader of a national team accustomed to international success in spite of the challenges of women’s rugby.