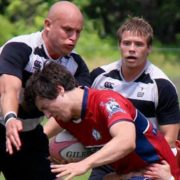 When and where did you play rugby?

When did you play as an Eagle?

What is your favorite rugby memory?

I have several favorite memories from rugby and can’t define just one as my favorite. I loved my teammates and memories I took from Miami University and had so many fond memories of my coach Doug Edwards. Doug was like a second father to me and I loved being around him on and off the pitch. He was a great mentor.

When we beat Navy 9-7 at the Cherry Blossom Tournament in Washington, D.C. in 1996. When we beat Ohio State for the Ohio Championship in 1996 When I played in San Diego with OMBAC with several of my All American teammates from 1996- Meeting and being coached by Bing Dawson and playing with all the Eagles I looked up to when I was playing in College.

Getting my first Cap against Australia in the 1999 World Cup. Playing against South Africa in 2001 in Houston, TX. Being named Collegiate All American in Boulder Colorado in 1996. All the experiences that I gained when playing over at the Watsonian’s Rugby Club in Scotland. Meeting great friends over in Edinburg & meeting the Hasting Brothers since they ran the club. Playing in the 2007 Super League Finals against Belmont Shore.

Playing against Canada for the 2003 World Cup qualifiers and it being in honor of my college coach Doug Edwards after he had just passed away a few months earlier. Playing against Northampton in Chicago when they were on tour and being offered a contract opportunity. My 7 caps gained while in the US uniform. I met my wife through the rugby family.

What are you doing now?

I’m an Enterprise Sales Representative for Zeno Imaging in Austin, TX in technology sales. I live in Austin, TX for 2 years after living in IL for 15 years. I’m currently out of retirement and currently playing for the Austin Blacks rugby club. I am an assistant coach for the Lake Travis (LT) High School Team (State Runners Up this Year).

I hold the position of Chairman of the Board for the Autism Trust, USA. It is a center for children that have Autism and it creates purpose for those children/young adults that are currently affected by autism. We are currently trying to open and create a center for recovery for people affected with autism. This was sparked by my son who was severely autistic and we were able to reverse the symptoms and create a functional life for him.

What do you believe is the most important factor in growing the game in the United States?

I believe we need to start coaching children the fundamentals of rugby at a much earlier age (starting around 6 to 7 years old) and surround them with great coaching. They need to be moved and motivated like I as by my college coach and mentored correctly.

If we can surround great athletes that we have in the US with the knowledge base at an earlier age and give them strong fundamentals from the beginning then we would be in a much better position for a feeder program for higher level rugby.

We need more Junior High & High School programs that feed college programs & need strong coaches in College to help these players get to the next level whatever that maybe.

We need to have a major sponsorship come from a large corporation to dump money into developing all that was listed above.