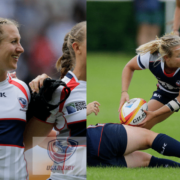 Deven Owsiany is a former National Tournament MVP and is currently in the player pool for the Women’s Rugby World Cup this August. Owsiany began her rugby career at Penn State in 2009 and has been playing and loving the sport ever since. Learn more about Deven’s experience and how you can make an impact on the Women’s National team.

USA Rugby Trust:When and where did you start playing rugby?
Deven Owsiany: I started playing rugby the spring of my sophomore year of college in 2009 at Penn State.

USART: When did you start playing with the Eagles?
DO: The first camp that I attended for the USA team was in 2010, the summer after I had been named MVP of the national championship game. My first 7s international tournament was Dubai 2011. I earned my first 15s cap against South Africa in 2013.

USART: What is your favorite rugby memory?
DO: My favorite rugby moment was being named MVP of the National Tournament in 2010 and getting hoisted up on the shoulders of my teammates and best friends. My parents got the graphic from RugbyMag and have it framed in our hallway at home.

USART: Where are you now?
DO: I am currently living in San Diego working at Rady Children’s Hospital as an Analyst for the Emergency Department. I play with the San Diego Surfers and I am aiming to make the World Cup squad this summer.

USART: What do you believe is the most important factor in growing the sport of rugby in the US?
DO: I think the most important factor in growing rugby in the US is to have successful national teams that youngsters can look up too and say, “I want to be them some day.” Having knowledgeable coaches and referees will help the US compete as a top nation. Rugby is by far the best sport I have ever played and it because of the people I’ve met, the places I’ve traveled, and the memories I’ll have for a lifetime.

This August the Women’s National Team will take the pitch at the Womens’ Rugby World Cup in Ireland, and they are depending on the support of the rugby community to be able to perform at their best and achieve their dreams. Donations will provide the Eagles with the necessary funding for training, equipment, room and board and more. Click here to make a donation and show your Eagles pride!