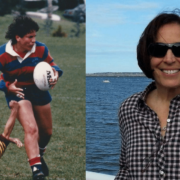 Jan Rutkowski experienced a fulfilling rugby career both as a coach and player, attending the first-ever Eagle camp, winning six National Championships and recently being honored and acknowledged with the 1987 Eagles. Learn more about Jan!

USA Rugby Trust:When and where did you play rugby?
Jan Rutkowski:I started playing in 1980 for Beantown RFC and retired in 1998. During that time, we won six National Championships. I also played on various select teams, including New England Rugby Union, Eastern Rugby Union and the USA Eagles. After I finished playing, I coached at Beantown for around 10 years, first as an assistant and then as the head coach.

USART: When did you start playing with the Eagles?
JR: I was a member of the Eagles from the beginning. I attended the first Eagle camp in 1987 (I think). I played in two World Cups, including the 1991 World Champions, the World Rugby Festival (1990 in New Zealand) and the 1993 Canada Cup. My first appearance came in 1990 and my last was at the 1994 World Cup. In addition, I toured with WIVERN, a national invitational side that was a precursor to the Eagles.

USART: What is your favorite rugby memory?
JR: As for most people, it’s so hard to choose one. With the Eagles, winning the World Cup is obviously a significant highlight. With Beantown, winning six National Championships was awesome. And it’s hard not to love the Saranac Can-Am Tournament. We had a great long winning streak there. In the end, it’s really the experiences I had with teammates, coaches and opponents.

USART: Where are you now?
JR: I am in the Boston area, close to most of my family. After 30 years working in the corporate software development world, I have spent the last eight years working in higher education – still IT, but in a different arena.

USART: What do you believe is the most important factor in growing the sport of rugby in the US?
JR: Several things come to mind, and I think its really going to take a combination of things. Exposure to the game – whether it is playing exposure at a younger age, more television broadcasts or opportunities to see it played in-person at a high level. All of these things are happening now, much more so than when I was playing. In Massachusetts, rugby now falls under the MIAA, which governs high school sports in the state, which is a really big deal. There’s also money – with a country the size of the USA, it’s costly to gather players for camps and fixtures. The more money, the more likely you will get the highest-level players.

Jan remembers her World Cup experiences fondly, and now you have the power to help others enjoy these experiences as well. On August 13, the Women’s National Team will return to the pitch at the Women’s Rugby World Cup in Ireland versus Spain, and they are depending on the support of the rugby community to be able to perform at their best. Donations will provide the Eagles with the necessary funding for training, equipment, room and board and more. We’ll close this campaign to support the women on August 27 at the conclusion of #WRWC2017, so donate now to help the squad achieve their $150,000 fundraising goal for the Women’s XVs program!