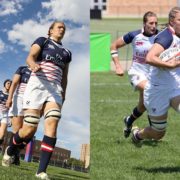 Kristin Zdanczewicz: I started playing in the fall of 1999 with UW-Whitewater for a collegiate season then I proceeded to play for Wisconsin Women RFC and currently play for the Minnesota Valkyries.

KZ: International debut with the Senior side in 2004 my first cap was against Scotland, Prior to me representing my country I was in the national pool as u’23 player and following the pathway at that time.

KZ: Representing my country in the 2006 World Cup and then becoming a captain in 2007-08, very excited at the opportunity I had and to play with those players at the time.

KZ: Currently I reside in Minnesota. I work as a Strength and Conditioning coach at the University of Minnesota and I continue to play rugby for the Minnesota Valks.

KZ: This is such a loaded question! As a player I enjoyed the fall 15’s season then in the spring/summer Higher Level All Star teams ie LAU, ITT’S National team camp or series I miss a bit of that structure. I think that if USA RUGBY to grow as a legitimate sport and be taken seriously at the collegiate, international level and we need to continue to invest in our grass root efforts and the pathways, which ever they choose to go with.