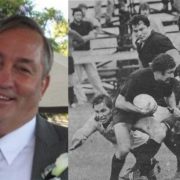 Over the years, rugby has developed and matured, both in the United States and globally. For the past four decades, Blane Warhurst has witnessed these changes firsthand. A member of the American squad at the first-ever Rugby Union World Cup in 1987, Warhurst is optimistic about the changes he has seen and the future of rugby in the U.S.

USA Rugby Trust:When and where did you play rugby?
Blane Warhurst: I first played rugby from 1970-75 at the University of California, Berkeley, then for the Old Blues from 1976-91.

USART: When did you start playing with the Eagles?
BW: I played with the Eagles from 1981-87, including an appearance at the first World Cup in Australia [and co-hosted by New Zealand].

USART: What is your favorite rugby memory?
BW: I’ve had many great memories, but near the top has to be winning the semi-final game with a push-over try in overtime against the hated Old Blue New York. This propelled us to the championship the next day and led to seven more championships in the 1980s.

USART: Where are you now?
BW: I have lived in Hayward (“mid-” San Francisco Bay area) for forty years. I settled there to receive a master’s degree from Cal State Hayward (now California State, East Bay) and coached both football and rugby at the local high school and junior college levels.

USART: What do you believe is the most important factor in growing the sport of rugby in the United States?
BW: I think we first need to introduce rugby to the general population by getting Rookie Rugby in the regular P.E. curriculum. Next, you need local clubs to sponsor youth and high school teams. The result will be broader participation, including less affluent groups of the population that would allow the U.S. to become a world-class rugby power. I like to state to anyone who will listen: when our rugby teams look more like our football teams in their diverse makeup, then we will have a much better chance of being successful.