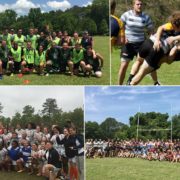 “I started playing rugby when I was 27. A friend of mine and I got together after watching a men’s match and thought, ‘why should they have all the fun?'”

Ever since she first set her sights on rugby, Simone Bontly has been a strong advocate for getting women into the game. Though she found rugby at a later age, Bontly’s experience in the sport is vast and varied, having played on and off for 10 years, coached for her local men’s club and her children’s school teams, and served in various capacities for Carolinas Geographic Rugby Union (CGRU). Her legacy also includes establishing the women’s club team in Columbia, South Carolina, in 2006 after recognizing that there was a talented pool of women in the area, many of whom were graduating from the University of South Carolina and wanted to continue their athletic pursuits after matriculation. In addition, Bontly served as women’s coordinator for the Palmetto Rugby Union. During that time, North Carolina and South Carolina joined forces to form CGRU, and after a two-year stint as women’s director there, Bontly was voted in as president.

As one of the largest rugby unions in the country, CGRU is proving their commitment to developing the women’s game. On behalf of the four athletes from their union selected to the Women’s Rugby World Cup player pool earlier this summer – Ryan Carlyle, Jamilia Reinhardt, Kimber Rozier and Nicole Burr – CGRU donated $500 to support the squad’s training, travel, and room and board. Bontly explains, “The women’s game is where it’s at! If we can get our women to be at the top of their game, American rugby as a whole will grow.”

To Bontly, contributing to the Women’s Eagles means more than just supporting the growth of rugby – it is an opportunity to empower women across the country. Few understand the impact rugby can have on women better than Bontly, who found a network of support through the sport as she and her family moved around the country as part of her husband’s commitment to the military. “Rugby is the best,” Bontly says. “Being in a military family and moving from place to place, I always knew there was going to be a rugby club wherever we lived, so we always had friends and family. We don’t live close to our family, but our rugby community is our family.”

Rugby means more to Bontly than she ever could have imagined, and because of this, she wants to encourage the rugby community to come together to support the Eagles in their pursuits in Ireland. “Even a $10 donation can go so far,” she says. “It’s important to empower women through sport. It gives women the opportunities to have a voice – to find our voice and not be scared to use our voice. The Eagles should know they have our full support behind them!”

Join CGRU by making a contribution to the Women’s XVs program today. Your donation will not only help defray the costs of the World Cup for the current team, but will build a foundation for future athletes to become the best ruggers they can be.