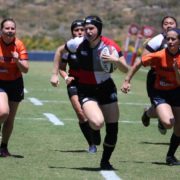 With the 2018-19 college season set to begin in the coming weeks, there have been some major shifts across all levels of collegiate competitions. With a string of teams moving up through to the D1A ranks, additional movement comes from Men’s D2.

The top flight of men’s collegiate rugby has seen some new faces join the fray for the 2018-19 campaign. The youngest conference in the competition, Liberty, has added an additional three teams to their ranks. American International College has moved into the I-95 division after dominating the D1AA competition for the last decade. They will be joined by crosstown rivals, Boston College; who after being one of the premier D1AA teams in the Northeast, will now find their new home in the New England Division. The final addition to Liberty Conference is D2 power house, State University of New York – Oswego, who have been added to the Empire division.

Elsewhere in D1A, there has been movement within the Independents ranks. Utah Valley has been renewed as a member of D1A and will now be led by the former BYU head coach David Smyth. Smyth’s old program will now be leaving the independent ranks after finding a permanent home in the Rocky Mountain Conference. One of last year’s strongest performers in the Independents, is also on the move with Grand Canyon University joining the California Conference. The biggest change to the independents, however, has been the University of Notre Dame. The Fighting Irish will be joining D1A after spending the last few years competing as an independent in D1AA. Their first game will be against the Big Ten’s Michigan.

In the Big Ten, Iowa drops from their ranks moving into D1AA. TCU and Houston both move on from Red River as North Texas, coming from D1AA as one of the premier squads in the Spring, are added.

There has been a changing of the guard in women’s collegiate rugby. BYU will no longer compete at the highest level, having departed from D1-Elite. Central Washington University will move in as its replacement. Central Washington’s women’s program continues to excel having been competitive in the National Intercollegiate Rugby Association  competition, where they were semifinalists in 2017.

A change to their playoff structure has also taken place. Rather than sharing their final on the same weekend as the Spring Championships, they have decided to host their own stand-alone championship. The Women’s D1 Elite Championship will take place the first weekend of April, with the semifinals occurring two weeks prior. Venues are still to be determined.

There will no longer be a D1AA National Championship, as the decision has been made to forego the combined match in favor of crowning Fall and Spring Champions. The decision was made in a vote by all D1AA conference commissioners and passed with an overwhelming majority.

“This compromise was made due to a variety of factors, including academic schedules, availability of facilities, weather issues and the emergence of competitive sevens within one academic year,” said USA Rugby’s Collegiate Director Rich Cortez, “Nevertheless, those teams that reach their respective championships will do so via highly competitive playoffs. Allowing the commissioners and schools to determine the move was integral to its execution.”

Another major move to come from D1AA is the disbanding of the South Independent, with those teams being absorbed by the Southeastern and Florida conferences.

The Lone Star Conference has now moved into the D1AA division. Only the Gold Coast Men’s D2 teams will still play their abbreviated schedule in the Spring. D2 has crowned a National Champion in the fall since 2013 as the conferences complete their league schedules and playoffs during the fall semester.