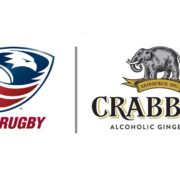 The No. 1-selling alcoholic ginger beer in the United Kingdom has a history with the game of rugby, partnering with the Scottish Rugby Union earlier this year in its hometown of Edinburgh. With USA Rugby, Crabbie’s will be visible at all Eagles home matches, beginning with the Nov. 4 meeting with the New Zealand Maori All Blacks in Chicago.

Crabbie’s link with USA Rugby is especially important at this time in the organization’s history, as a professional domestic competition, rising international status, and long-standing, healthy club community have helped to raise the sport’s exposure Stateside. More than 1.3 million players and nearly 4,000 clubs will benefit from the Crabbie’s partnership, which is set to further increase the profile of the fastest-growing team sport in the U.S.

“Crabbie’s is a passionate supporter of rugby wherever it is played,” Steve Ferris, Managing Director of Halewood Wine & Spirits in North America, said. “With the game growing so fast in the USA, and Crabbie’s already well established across North America, it is natural for us to expand our backing for the game overseas for the first time.

“With American players in the Aviva Premiership and various European leagues, the profile of the game is at an all-time high. Crabbie’s and USA Rugby will work together to encourage participation and promote the game to the next level.”

Established in 1801 in Edinburgh as Crabbie’s Ginger Wine, John Crabbie & Co.’s Crabbie’s Alcoholic Ginger Beer is the top-selling brand of its kind. Sponsoring the likes of the famous Grand National horseracing event and storied Scottish soccer club Hibernian, Crabbie’s has supported various sports to raise awareness for their development as much as the brand’s.

For the USA Eagles’ Friday, Nov. 4, match against the visiting New Zealand Maori All Blacks during “The Rugby Weekend Presented by AIG,” Crabbie’s will sponsor a “Pub to Pitch” program, hosting rugby enthusiasts during the day before providing buses for transport to and from Toyota Park. The Globe Pub, just down the street from Wrigley Field in northern Chicago, and Cactus Bar & Grill, located two blocks east of the Chicago River on West Van Buren Street, are to welcome pre-game festivities from 11 a.m. to 4 p.m. CT, at which time buses will begin departing for the match venue. Additional information regarding tickets and establishment policies are available on Eventbrite.

“USA Rugby and its members and fans are passionate about the sport, so it’s only right we partner with Crabbie’s, an organization that has proved time and time again it supports the game of rugby,” USA Rugby Chief Executive Officer Dan Payne said.

Available to those 21 years of age and older in the U.S., Crabbie’s Alcoholic Ginger Beer is sold in three flavors: Original, Spiced Orange, and Scottish Raspberry. Visit crabbiesgingerbeer.com for cocktail recommendations and more information on where to find Crabbie’s Ginger Beer.

USA Rugby and Crabbie’s encourage rugby fans to consume alcoholic beverages responsibly, and respect fellow supporters the same way they would respect the game of rugby.