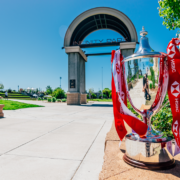 GLENDALE, CO. – Pools and schedules have today been announced for the HSBC USA Women’s Sevens 2018 tournament in Glendale, new opening round of the HSBC World Rugby Women’s Sevens Series.

The international tournament, to be held at Infinity Park from October 20-21, will feature 11 core and one invitational women’s rugby sevens teams as they begin their journey to qualify for the Tokyo 2020 Olympic Games.

The two day event will see pool play fill Day One as each respective team competes for the chance to advance to the knockout rounds commencing on Day Two. The tournament Champion will come away with gold medals and the coveted cup, while silver and bronze medals will be awarded to the runner-up and third-place teams.

Competition begins at 10:30 AM MT with a battle between Pool C opponents Canada and Fiji. Home team USA will open their tournament run in Pool B against England, while reigning Rugby World Cup Sevens 2018 Champions New Zealand have a matchup against new core team China — also in Pool B. Rio 2016 Olympic Gold medalists and 2018 Series winners Australia will feature in Glendale, as well, facing invitational team Mexico in Pool A.

Knockout rounds will open with the Cup Quarterfinals at 10:30 AM on Day Two, with the Championship Final set for 5:30 PM.

As teams return for the first time since Rugby World Cup Sevens 2018, with Olympic qualification at the root of their season endeavors, the stage is set for a thrilling weekend in Colorado.

Tickets for the 2018 HSBC USA Women’s Sevens tournament are one sale now starting at only $15 at USAwomens7sGlendale.com. VIP packages and entry to “The Real Octoberfest” beer festival are also available, with select levels offering discounts to fans who purchase before match day.