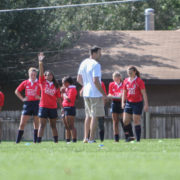 BOULDER, Colo. – The third annual USA Rugby High School Stars and Stripes Camp will be held at University of Northern Colorado in Greeley July 21-25, USA Rugby announced Friday. The camp, which gives top athletes from all across the country the opportunity to take part in elite competition, was made possible due to the generous grant obtained from the Daniels Fund.

One hundred young men and women will train with pathway coaching staffs and nationally-certified medical staffing and fitness and nutrition specialists for four days – one more than each of the previous two incarnations. The fifth day of Camp will be game day, with the genders split into Stars and Stripes teams.

Players in attendance at Camp will get a taste of the high performance environment to which Eagles and professional rugby players are accustomed. In addition to the All-American coaches, national team selectors will be on hand to recommend athletes to the national team pathway, be it with the High School All-Americans, Junior All-Americans, Eagles Sevens or 15s teams, or one of the Olympic Development Academies.

“The Stars and Stripes Camp continues to develop as a pathway for both coaches and players,” USA Rugby Coach Development Director Josh Sutcliffe said. “From here, coaches have gone on to head coaching positions with top universities, and others have used the experiences they’ve gained from our development program to help their current teams and local unions grow the game.”

Seventeen female attendees at last year’s Camp were selected to the GHSAAs for the two sevens teams that competed at the 2015 Las Vegas Invitational, while seven boys who have attended a Camp were members of the AIG Men’s Junior All-Americans during their two-match series against Canada earlier this spring.

Richelle Stephens attended the first Camp in Greeley during her Fallbrook High School career and has since moved on to represent her country on the international stage at the 2015 NACRA Sevens Championships, where the Men’s and Women’s Eagles Sevens qualified for the Rio 2016 Olympic Summer Games.

“The Stars and Stripes Camps are the key stage where athletes begin to enter our national high-performance trainings squads,” USA Rugby Director of Performance Alex Magleby said. “It is an opportunity for the upper echelon of athletes at each age-grade level to be exposed to national team standards and subsequently for those athletes to then choose to commit to the behaviors required of their daily training environment back home to chase down future international honors.”

Coaches with aspirations to learn more about representative and select sides should apply to become an assistant coach at the Stars and Stripes Camp. A minimum Level 200 certification is required, as is a background check.