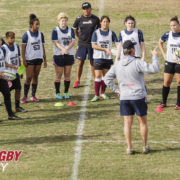 When and where did you play rugby?

I started playing rugby at Florida State University in 1978 when there was no distinction between college and after college club programs.

When did you play as an Eagle?

What is your favorite rugby memory?

You would think it was winning the World Cup, but it was actually attending the World Festival in 1990 in New Zealand. It was the first event of its kind, somewhat of a pre-World Cup, and a chance to meet other international players besides Canada!

What are you doing now?

What do you believe is the most important factor in growing the game in the United States?

It seems we have more opportunities than ever before with organizations like Serevi Rugby, but I don’t know that we always have coaches to support the need or desire to play. Men tend to stay in the game longer and will often coach when done playing. We need more women to come back and be part of the coaching development.